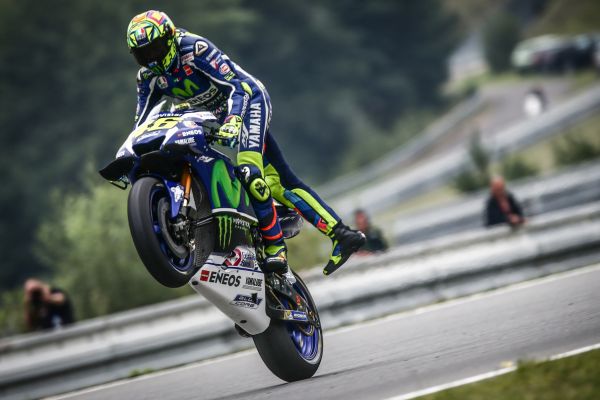 Valentino Rossi ended an experimental first day at Brno fifth fastest overall, as he gets to grips with his Yamaha M1.

The Doctor set his stall out from the off, ending the first session second fastest overall, just behind Austrian Grand Prix winner Andrea Iannone. Rossi continued to work through the afternoon session, and despite leading for large parts of the session, he ultimately ended the session in only fifth, although he did knock a further three tenths of a second off from his morning time from free practice one.

One of the big takeaways from the opening day of action in the Czech Republic is the contrast of the new Michelin tyres how they will affect the lean angles of the riders this year.

“The first feeling was not so bad: this morning and also this afternoon I was quite fast, we worked a lot. We have some different options and some different settings and also some different tyre choices on the front and the rear,” explained the nine-time World Champion

“I’m not so bad, I’m fifth but I’m not so far from pole position. All the top riders are fast so we have a lot to do, a lot of work on the bike, but the first impression is positive.

“The lean angles changed a lot compared to last year’s tyres, because last year we were able to lean more, with Michelin a little bit less because it’s a different shape of tyre. It’s just a feeling that you have to understand, usually it’s the bike that tells to you how much you can do, that’s always the limit. The best riders are able to go close to limit but not too much,” he said.