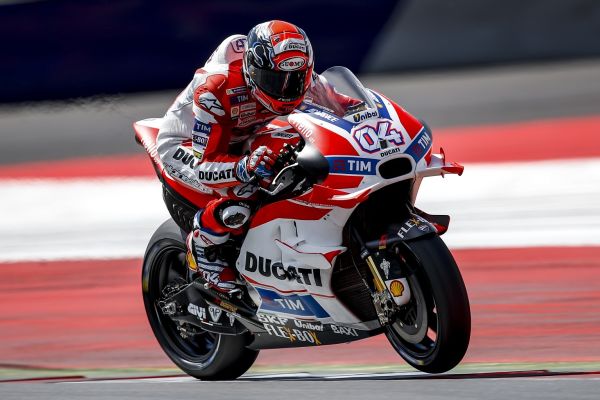 Andrea Dovizioso topped a Ducati heavy first day of testing at the new Red Bull Ring in Austria, whilst KTM made their first public appearance ahead of their 2017 debut.

Dovizioso was the first of four Ducati’s at the top of the timing sheets, ahead of his team-mate Andrea Iannone, Scott Redding and test rider Casey Stoner. Maverick Viñales was fifth fastest ahead of a three more Ducati’s in the shape of Hector Barbera, Eugene Laverty and Danilo Petrucci.

Dovizioso’s best time of the day was a 1:23.764, whilst times will all be relative, it will certainly give Ducati a boost heading into tomorrow and the next round at the Austrian circuit, with hopes of ending their six year victory drought. KTM debuted their new RC16 machine at the Spielberg in the hands of both Mika Kallio and Tom Lüthi. Despite ending the day just over two seconds off of the best time set by Dovizioso, KTM were said to be delighted with the pace they showed and left them buoyed with the progress they’ve made. KTM will be hoping that Kallio can transfer this pace to his wildcard appearance at the season finale in Valencia.

Despite not appearing on the timing sheets, Aprilia and Sam Lowes were in action today. The RS-GP didn’t have a transponder fitted to it, but like KTM, Aprilia were said to be very happy with the pace of Lowes and the speed he showed on the MotoGP machine.

All riders who rode today will be back in action tomorrow, where they will wrap up the test and head off on their summer holidays, before gathering back in Austria for the next round of the World Championship.