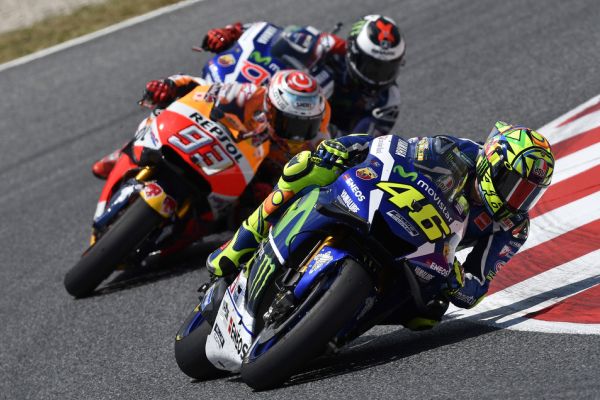 The Mallorcan was unceremoniously punted out of his home Grand Prix by Andrea Iannone, costing him his lead in the World Championship, forcing him to watch the battle between Rossi and Marc Marquez from his pit box.

Despite being taken out of the race by Iannone, Lorenzo admitted that he never had the pace to challenge his team-mate who was already the better part of five seconds down the road.

“I had a good start and on the new tyres was more or less at the level of all the other riders,” the World Champion told German website Speedweek.com.

“But I already knew before the race that I get problems when the front tyre starts graining, and this is exactly what happened. Rossi wouldn’t have been so strong if his bike suffered the same graining. So it looks as if he could conserve his front tyre more by ridding differently. He was also under the difficult conditions with low grip, and he ride incredibly. He rode an incredible race, I could not ride at his level,” confessed Lorenzo.

“The truth is that all weekend I couldn’t adapt my riding style so that I could reduce the problems with the front tyre.”

After his DNF, Lorenzo now sits 10 points behind Marquez in the MotoGP World Championship standings and just 12 points ahead of Rossi, with the paddock heading to Assen next weekend, the scene of last season’s famous battle between Rossi and Marquez.