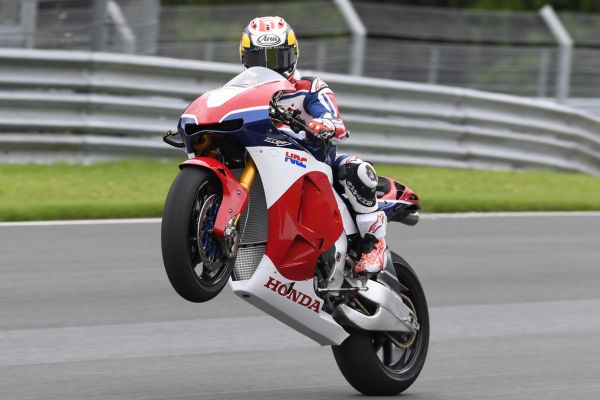 Factory Honda riders Marc Marquez and Dani Pedrosa have had a taste of the new Red Bull Ring in Austria, albeit on the road legal RC213V-S and not their usual Repsol Honda race machines.

The Red Bull Ring is the newest track on the MotoGP calendar and will make it’s debut on the World Championship calendar in August. However the Repsol Honda duo managed to get an early sighting on the new circuit with the Red Bull media house producing content with the sponsored pair.

Whilst Marc Marquez got some early laps on the circuit last year, it was Pedrosa’s first time at the circuit which last hosted a World Championship motorcycle round back in 1997, where a 18-year-old Valentino Rossi finished runner up in the 125cc race.

The MotoGP testing rules prevented Honda from taking their full race bikes to the circuit, however the road legal RCV213V-S were fitted with slick tyres and in full race trim.

“It was pretty bumpy then [last August], but with the new asphalt laid on it is much smoother now,” said Marquez to Speedweek.com.

“It has got some interesting corners, some of which, like the final one, seem to be pretty easy but will turn out difficult and probably not forgiving. As Red Bull Ring consists of only two left-hand corners, maybe the tyre there will be too cold in the first lap, so we have to pay attention.”

The World Championship leader said that the circuit reminds him of Austin – a circuit in which Marquez has won all four MotoGP races held there – with all the elevation changes.

“Some sections of these slopes remind me a bit of the track in Austin, because there are hard braking zones. The biggest difference is the uphill and downhill parts,” he said. “But we also find a couple of stop-and-go corners, followed by hard acceleration pieces.”

Honda satellite riders Cal Crutchlow, Tito Rabat and Jack Miller will all get their first taste of the Red Bull Ring a month ahead of the first MotoGP during a two-day test on July 19th and 20th.