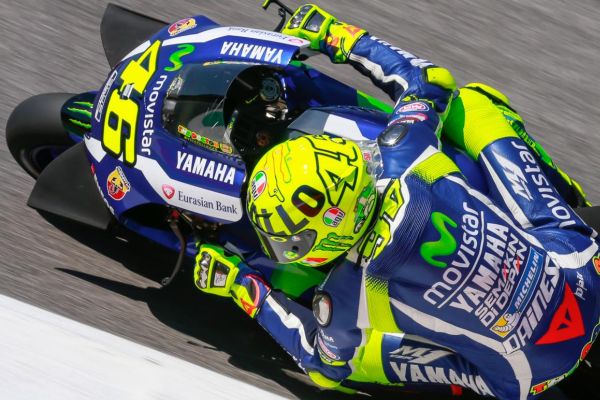 Valentino stormed to pole-position at his home Grand Prix with a stunning lap ahead of Maverick Viñales and Andrea Iannone.

The Italian was confident with his free practice pace and but couldn’t have expected to claim pole position in his wildest dreams. The Doctor who is sporting a special Mugello yellow helmet, rolled back the years with a stunning 1’46.504 as he slipstreamed and followed his future team-mate Maverick Viñales around for the lap, for his first pole at Mugello since 2008.

Viñales’ pace was equally as impressive as Rossi’s future team-mate then gave the Doctor his biggest threat for pole position as he ended just 0.094 behind Rossi. The Spaniard’s move to Yamaha was confirmed on Thursday and Viñales will be hoping to build on his front row start to try and claim a second podium in as many weeks.

Third place was Andrea Iannone. The Italian will be disappointed to not have claimed pole after looking set to claim the pole position after sitting atop the timing sheets for all the session after the man who will take his seat at Ducati next season, Jorge Lorenzo, around for his fastest lap of the session.

Marc Marquez was fourth place and the top Honda as he was struggling to keep his Honda in line, with the RC213V still visibly difficult to ride. Reigning World Champion Jorge Lorenzo will start from fifth place after a tough Saturday, the series points leader will have his work cut out if he wants to win his fifth Italian Grand Prix in the past six years. Aleix Espargaro will join the World Champions to make an all Spanish second row.

Dani Pedrosa will head the third row ahead of Bradley Smith and Danilo Petrucci, whilst Scott Redding, Michele Pirro and Yonny Hernanadez round out row four.