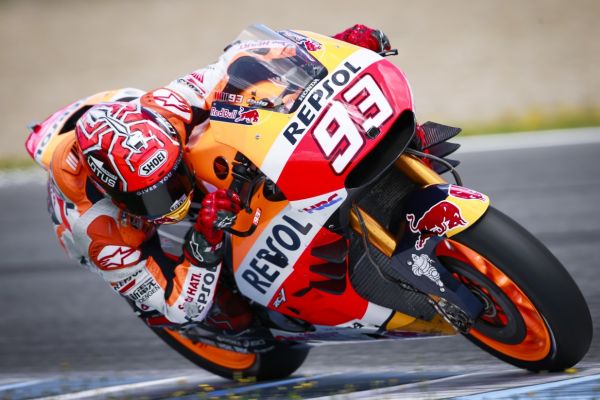 The former World Champion was on track today testing the three new compounds of front tyres brought to the test by Michelin, as well as a new swingarm. In spite of this, the biggest note of interest during the day’s test was without doubt the tri-winged Honda RC213V the Spaniard was riding. Honda were behind the eight-ball when it came to wings compared to Ducati and Yamaha, but appear to be making up for lost time with their latest aero package.

Marquez completed 91 laps today, with his best time of the day, a 1.39.313, coming on his eleventh lap. His fastest time of the day was 0.019 seconds faster than second placed Lorenzo, although over a second slower than Valentino Rossi’s pole time from Saturday. The Spaniard did suffer a small crash at turn two in his final run of the day, although walked away from the incident unharmed.

Marquez was happy overall with his days work, as he worked with the new updates to try and find a good base race setting.

“We’re satisfied after today because we tested out a lot of different things. We not only tried some new winglets and a new swingarm, but we also did a lot of laps to try to understand or rule out different setups,” explained Marquez after the day’s testing.

“The most striking thing for people was our testing three different winglets. The aerodynamic side of things had a lot of untapped potential; now that this has been opened up, we can work a lot on this aspect because there seems to be no limit to what you can do with it,” he said.

“We also tested three different front tyres today, but the one that we used this weekend was working well too.”