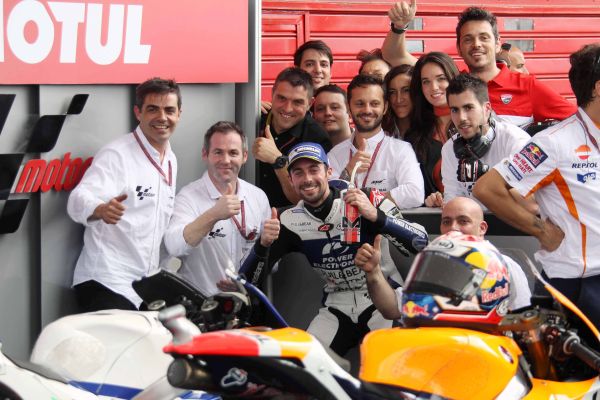 The Argentine Grand Prix was run with a compulsory pit stop to be held halfway through the race due to tyre concerns after Scott Redding’s tyre issue in free-practice four.

Heading into the final lap Laverty was in eighth position battling with fellow Ducati rider Hector Barbera for seventh place. Ahead of the Irishman, Pol Espargaro had an offtrack excursion allowing both Barbera and Laverty through. In the final corner a crazy move from Andrea Iannone saw him take both himself and his team-mate of second and third respectively.  Laverty completed his job by making the move on Barbera himself in the final corner to claim a historical fourth position.

“That last lap was something a bit special! I think I started it in eighth position and finished it in fourth, it was an incredible race, a race of two parts because we obviously had to come in to change bikes,” explained the 29-year-old.

“The track was a little better on the second exit but I realised that I had to make up all my time in corner entry because I had no rear grip compared to the other riders, so I pushed the front tyre and was able to keep a good rhythm. After the preseason we had, I can’t ask for more than thirteen points in the second race of the season.”

After his twelfth place finish during the season opener in Qatar and his fourth place in Argentina, Laverty is currently sat on 18 MotoGP World Championship points, nine more than he managed in the whole of 2015.

“Last year I managed nine points over the whole championship so to get thirteen in one race is great recompense for myself and for the team, who kept faith in me and let me work my way back in testing,” he said.

“We were off the pace after so many big knocks and it took me a while to regain my confidence but I feel we are back where we should be now and I want to thank the whole team for their efforts.”