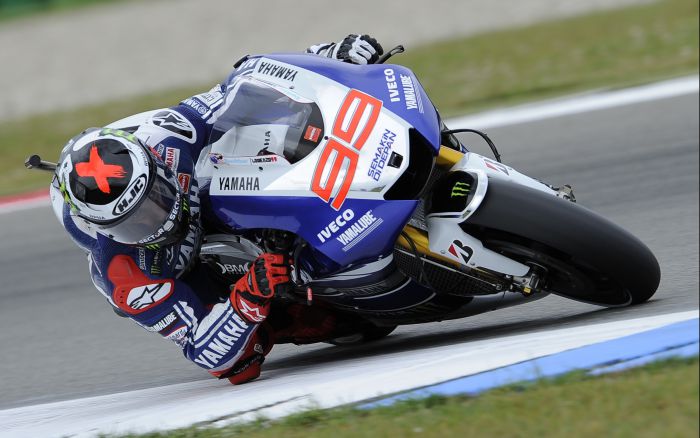 World Champion Jorge Lorenzo has made a stunning turn around, and will line up on the grid to start the Dutch TT in Assen.

Lorenzo was a victim of a huge highside on Thursday afternoon, resulting in a broken left collarbone, and leaving his championship chances seemingly in tatters.

Jorge was then transfered to Assen hospital where he was going to undergo surgery on Friday evening, or Saturday morning. However Lorenzo was transfered to Barcelona hospital, and underwent a two hour operation between 2 and 4am.

Lorenzo would have to pass a fitness test, and ride the morning warm up in order to have any chance of racing, prompting Lorenzo to tweet a picture of him doing press ups on Friday night.

Morning warm up came, and Lorenzo competed, ending the session in eighth, although looked like he could’ve taken the top spot had traffic not got in his way.

After the session it was confirmed that Lorenzo would be fit to race.

Speaking after the session, Lorenzo said: “Well, finally we are here, to race. In the first laps of the warm up I felt a lot of pain, especially when the bike accelerated and I had to hold it strongly.

“I thought of either giving up or continuing but luckily I continued and the pain decreased as I did more laps. I’ve grown accustomed to molding my body to the bike to avoid pain.

“The problem will be in the race when I have to overtake on the brakes because I can’t force the shoulder a lot. I have a good rhythm and I feel much better on the turns, but obviously worse than on Thursday.

“Anyway, I have decided to race. Just finishing the race would be a small victory for me but I would like to take at least five points or more, to take less would not be much after suffering a lot. At the end of the race we’ll see if it was worth it. I’m proud of myself for the effort in these two difficult days after the crash and also of my team for their support.”

The session was topped by Valentino Rossi.