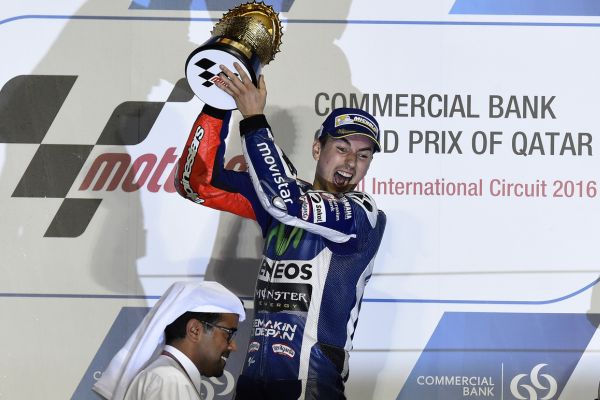 World Champion Jorge Lorenzo has insisted he will keep his feet on the ground despite getting his title defence off to the perfect start.

The Spaniard dominated pre-season testing, finishing both the Malaysian and Qatari pre-season tests fastest before going on to win the season opener in Qatar in typically flawless fashion, by just over two seconds ahead of Andrea Dovizioso and Andrea Iannone.

Lorenzo’s only blip in pre-season was at Phillip Island, a cooler circuit with no data for the new Magneti Marelli software and Michelin tyres, a challenge that will be present again this weekend. The MotoGP field have no previous experience or data with the new ECU or Michelin tyres unlike in Qatar, where they had the final pre-season test at the Losail International Circuit just two weeks before the season started.

Tyres were the hot topic of conversation during last season’s race at the Termas De Rio Hondo circuit, with the softer tyre coming good later in the race. Lorenzo was caught out by this and could only manage a fifth place finish.

Despite only managing third place in 2014, Lorenzo is keen to extend his current win streak to three races in South America.

“I look forward to racing in Argentina,” said the 28-year-old.

“After the victory in Qatar and the good feelings on track, I now want to race at a circuit where in the past we struggled a bit. On the other hand, we need to keep our feet on the ground.

“We started the championship in a perfect manner but we still need to understand what the behaviour of the bike is like for different track layouts. I want to check if the bike with these electronics and tyres works well everywhere,” explained the Movistar Yamaha rider.

“Anyway to kick off the season like we did in Qatar is a good way to get confidence and work even harder to try to fight again for the victory here. The track is really nice and Argentina as well so I feel happy to go there.”