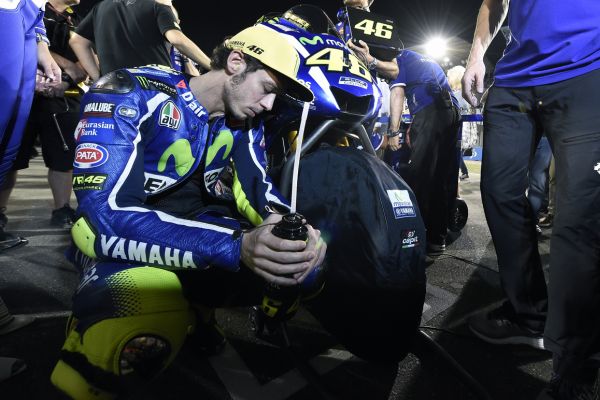 Valentino Rossi is eager to push on from Qatar start and replicate his 2015 win this weekend at the Termas De Rio Hondo, Argentina.

The Movistar Yamaha rider finished the season opener in Qatar in fourth place, less than two seconds off of second placed Andrea Dovizioso, but without the outright pace to truly battle Dovizioso and Marc Marquez for the podium.

The Italian heads back to Argentina, the scene of one of his four MotoGP victories of 2015, although arguably his controversial one of the season. Rossi caught and passed Marquez with just three laps remaining, before the pair came together causing the Spaniard to crash out of the race. Rossi later said that Marquez was bitter of this and Assen, prompting him to “help” Lorenzo to the 2015 MotoGP World Championship.

Rossi is aware track time be key all weekend, with no previous data at the Termas De Rio Hondo with the new Michelin tyres and Magneti Marelli software, Rossi will be keen to find a base setting for his M1.

The Doctor is of course a fan favourite at the majority of tracks MotoGP visits, but he is eager to return to South America where he feels a special connection with the Argentine founds.

“I am very happy to go to Argentina. In this place I have many fans and it’s always nice to feel the affection and passion of these people,” said the nine-times World Champion.

“I have great memories here. Last year it was a great race. It will be difficult to repeat the same result but we will try.

“In Qatar I was not able to go on the podium but it was a good race anyway. We worked well throughout the weekend. In Argentina we will have to do the same thing, but we’ll have to do better in the race, and try to get on the podium. I really like the Termas track and we will try to do our best.”

2 thoughts on “Rossi: In Argentina we’ll have to do better”