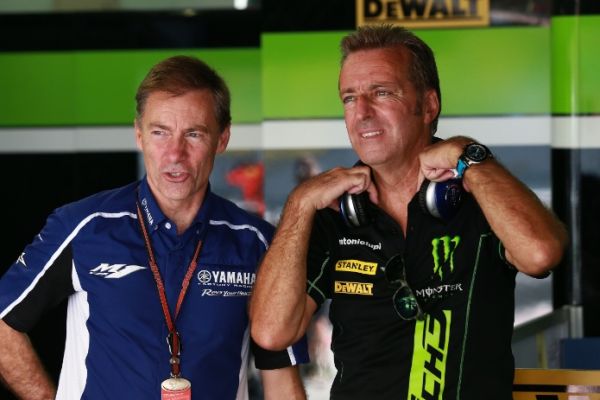 Yamaha Motor Racing Team Principal Lin Jarvis has said that should Yamaha secure the signature of Alex Rins, he would serve his apprenticeship in the Tech3 team, not jump directly into the Factory Yamaha team.

Yamaha are looking to secure their 2017 MotoGP rider line-ups early. Valentino Rossi has signed on for a further two seasons, whilst reining World Champion Jorge Lorenzo has been offered a new contract, as they hope to keep their factory rider line-up as it is.

Hoping to keep the factory line up as it has been for the past two seasons, the Tech3 satellite team won’t be afforded the same luxury. Current Yamaha Tech3 rider Bradley Smith has committed to the KTM factory, whilst his team-mate Pol Espargaro is widely expected to leave Yamaha (possibly reuniting with former team boss Sito Pons in a new MotoGP team) meaning the junior Yamaha team will be seeking new talent.

Top of that list is Alex Rins. The 20-year-old Spaniard was a revelation in Moto2 last season, bettering the results of his predecessor on the Pons Kalex machine, Maverick Viñales. Rins took victories in both Indianapolis and Philip Island, and backed that up with eight more podiums on his way to finishing the second place to Frenchman Johann Zarco.

Yamaha have made little secret of their desire to secure the signing of the Spaniard, and were even rumoured to have offered Rins a direct route to MotoGP at the same time as Jack Miller moved to the LCR Honda team. Rins however elected for the more conventional route of Moto2.

If Lorenzo decides to end his nine-year affiliation with Yamaha and move to Ducati, Yamaha wouldn’t look to promote Rins directly into the Factory alongside Valentino Rossi in 2017, much like Lorenzo did himself in 2008 or Marc Marquez did with Honda in 2013.

Instead Rins would have to follow the path of Ben Spies and prove his worth and learn his trade in MotoGP before finding himself as a factory Yamaha rider.

Jarvis beleives that whilst Marquez’ results aren’t entirely impossible for a rookie to replicate, the pressure that any move directly into a factory would put on a rookie under undue pressure.

“Marquez was and is a phenomenon. It’s difficult for any other rookie to achieve what Marquez has,” explained Jarvis, whilst speaking to German website speedweek.com.

“In my opinion, it would be extremely difficult to bring Alex Rins directly into the Factory Yamaha team from the Moto2 class, because we don’t know what level he is currently at, the pressure on him would be huge. Marc Marquez has managed it, but he has broad shoulders and was already a sensation in Moto2. It’s not impossible for him to imitate him and his achievements, but rather unlikely.

The Yamaha boss did confirm that Rins himself knew this, suggesting it had been made perfectly clear during contract discussions, with Tech3 team boss Herve Poncharal also a huge fan of Rins.

“If Alex does come to Yamaha, I think Tech3 to begin with would be the best option for him,” said Jarvis.

“I think Alex knows that Yamaha and Herve have an interest in him, but that’s pretty obvious.”

Photos via Yamaha and Pons Racing