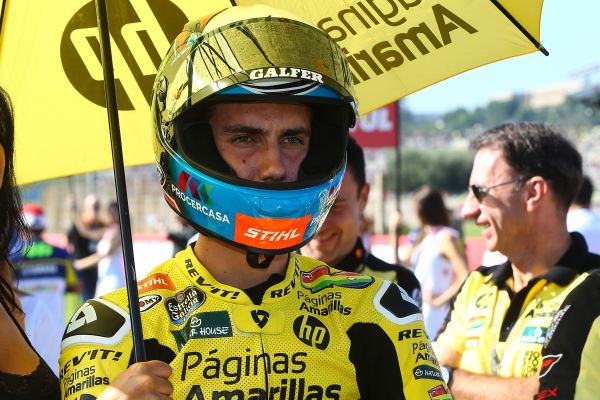 The first pre-season test of 2016 may not have even started yet, but that hasn’t stopped Yamaha looking towards the future, with two of the hottest young talents on their radar for 2017; Alex Rins and Maverick Viñales.

2017 looks set to feature one of the largest rider shake ups in recent seasons, with Maverick Viñales the only factory rider under contract beyond the 2016, whilst Bradley Smith and Pol Espargaro in the Yamaha satellite team also both only have a season remaining on their deals.

Yamaha will be looking to make up seeming lost ground on their opponents in terms of the young rider market during the next phase of contract negotiations. Honda of course have the 22 year-old Marquez and the 20 year-old Miller representing them in MotoGP, with names such as Alex Marquez and Franco Morbidelli surely on a Honda first refusal basis, due to their links through Marc VDS. Suzuki have arguably the most talents youngster of the lot in 20 year-old Maverick Viñales, whilst Ducati recently secured the signing of 22-year-old Scott Redding.

Whilst not old by any stretch of the imagination, the Tech3 duo of Smith and Espargaro, who are 25 and 24 respectively, are seemingly on their final chance to prove to the Yamaha bosses they’re capable of filling the enormous shoes left by Valentino Rossi, when the Italian finally hangs up his leathers.

The first name on the list of Yamaha is that of 2015 Moto2 Rookie of the Year Alex Rins. The Spaniard enjoyed a stellar rookie campaign in Moto2, and if you listen to rumours, even rejected the opportunity to replace Smith for the 2015 season.

Unlike Miller, Rins decided his best course of action was to sign a two-year deal with the Sito Pons run team in Moto2, as he even topped the points tally accumulated by his predecessor, Maverick Viñales.

“Alex Rins? I think he made ​​the right choice when he signed to be the Moto2 World Championship for two years,” Managing Director of Yamaha Factory Racing, Lin Jarvis told Speedweek.com.

“He definitely has a lot of talent. I think he’s a good candidate for the future of Yamaha… He’s very interesting rider; we’ve watch him from a distance,” he said.

“Unfortunately, we have no teams in the Moto3 and Moto2 World Championship, so we can’t get close to any of these talents in the junior classes… But Alex Rins is definitely on our wish-list; he’s made a few mistakes in 2015, but he’s fast and interesting for us.”

A second rider on that wish-list of Yamaha is Maverick Viñales. His superb rookie season has only increased his stock, with Honda and Ducati also expressing an interest in the Spaniard. Viñales ended his debut season in MotoGP in 12th position, just eight points behind his vastly experienced and highly coveted team-mate Aleix Espargaro, as the duo oversaw Suzuki’s full time return to MotoGP.

Viñales, who turns 21 next Tuesday, would more than likely only consider any offer from Yamaha if it was to partner Jorge Lorenzo in the Movistar Yamaha Factory team, rather than taking a “step-down” from a factory bike with Suzuki.

“Maverick Vinales? Of course already has a good experience in MotoGP,” said Jarvis .

“I don’t know the details of his contract with Suzuki. I heard he signed for two years with an option for 2017. Soon, it’ll be a hot topic in the MotoGP World Championship. So naturally, he is a rider who attracts the attention of Yamaha and any other MotoGP team.”

Beyond those two, Yamaha may have to take a chance on an unproven rider should they want to commit to a young project. Reigning Moto2 World Champion Johann Zarco is the same age as Bradley Smith. Whilst Danny Kent and Miguel Olivera are only moving into Moto2 this season, with Romano Fenati and Enea Bastianini will be competing in Moto3 once again.