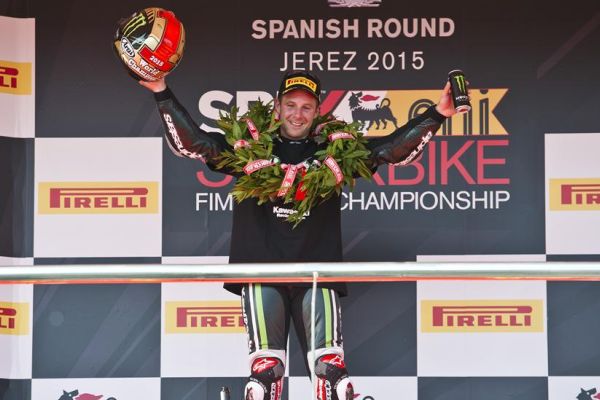 2015 World Superbike World Champion Jonathan Rea thinks that Valentino Rossi is the greatest rider of all time, although Jorge Lorenzo was the rightful winner of the 2015 MotoGP World Championship in his eyes.

Rea enjoyed the best season of his career to date, moving from the Ten Kate Honda team, over to the Factory Kawasaki team for 2015, and his decision was justified instantly, as he won the World Championship, winning half of the races, only finishing off the podium three times over the 24 race season.

Despite turning down multiple moves to MotoGP over the past few years, Rea has always maintained a strong interest in MotoGP, making no secret of his admiration for nine-times World Champion Valentino Rossi.

The Italian has enjoyed a stellar career, which has seen him 112 Grand Prix races on course to seven 500cc/MotoGP titles, earning him the nickname from some fans as the GOAT (Greatest Of All Time). Rossi’s presence and success wasn’t just down to winning races, with many fans citing his style of racing and personality on the bike as the reason for their support as much as anything else.

The Northern Irishman was recently asked who he considers the greatest rider of all time during a recent interview with sponsor Carole Nash.

“To be the greatest of all time – this is the most powerful recognition, any rider can get. It’s difficult to say,” he said, before answering with Valentino Rossi.

“He was very successful and worthy of this title,” said Rea. “What happened in Sepang, doesn’t change my opinion of Rossi. He’s a racer and gave everything to try and win the championship. This also applies to Marc Marquez… He gives his best and always tries to achieve the best for Honda. It was certainly not Valentino’s finest moment, accusing Marquez in that press conference.

“Rossi is always very well stocked and has everything under control. You’d think he was the conductor of an orchestra. He has the media, his team, all just always in control. You could get the impression that he is God.

“But then he allowed himself the first mistake of his career, went far and wanted to ‘disturb’ Marquez’ race,” he said.

Despite the fallout from Sepang, Rea didn’t think that it hurt the sport at all, he actually thinks that it helped the sport, with the media generated from the clash.

“It generated a lot of media interest, and that was good for the sport. People thought that it would have been a dark day, but eventually we were all eager and excited,” said the 28 year-old.

Although Rea thinks that Rossi is indeed fitting of his fan crown of the GOAT, he did think that the right man won the 2015 MotoGP World Championship.

“In the end, the right rider prevailed. Lorenzo had an impressive season. He got the most wins, and led the most laps. But I’m looking forward to watching Rossi in the new season. He might be even more motivated and even stronger in 2016,” he said.