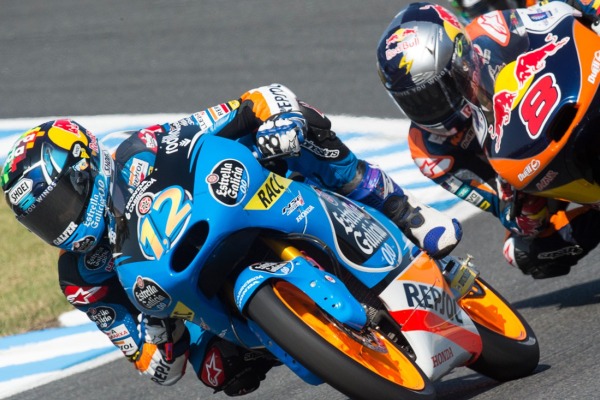 Moto3 title contender Jack Miller is looking ahead to this weekends title showdown, between himself and Spaniard Alex Marquez.

The 19-year old Australian came into the season as the pre season favourite, and lead the championship from the opening round until round 14 in Aragon, when a clash with Marquez caused the Australian to surrender his lead to the Spaniard.

Marquez extended his lead in Japan with a win after Miller clashed with Danny Kent on the final lap, before Miller took chunks out of Marquez lead with victories in Australia and Malaysia.

Miller currently sits eleven points behind Marquez who is heading home this weekend, meaning should Marquez finish on the podium he will be crowned the 2014 Moto3 World Champion. Despite the vast majority of fans rooting for Marquez this weekend, Miller is confident he can get a result he enjoys, even if he hasn’t had the best of results in the past.

“The Comunitat Valenciana Circuit is one of my favourites,” said the Red Bull Ajo KTM rider.

“It is a very special track, where I’ve always enjoyed the atmosphere – especially for the big races – and it is always full. I’ve never actually finished a race there, but I think I have had good performances.”

Despite testing there earlier in the year, Miller and his Ajo team will have to go in without a setting for the weekend, with the conditions in Valencia expected to be much warmer than they were in February.

“We will have to start setting the bike up from scratch, because even though we were there in pre-season the conditions are completely different. We must seize this last chance for the title. We’ll see what happens in this very decisive race.”

Regardless of the outcome this weekend, Miller will still get his hands on his LCR Honda production bike come Monday when the paddock reconvene for the first post season test.