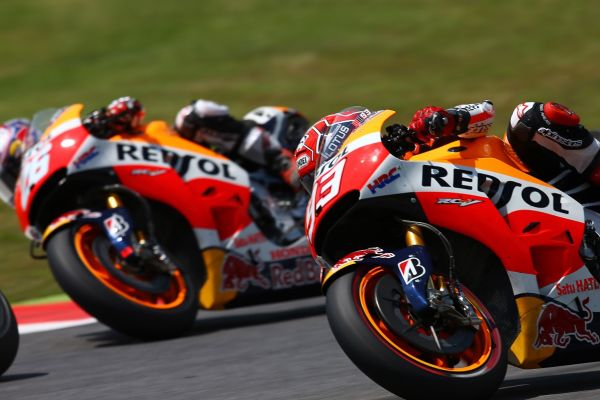 Reigning MotoGP World Champion Marc Marquez crashed out of his second race from six in 2015, leaving him fifth in the World Championship standings, 49 points behind series leader Valentino Rossi.

After two sensational seasons, and world titles in MotoGP, Marquez is now being faced with his first spell of adversity since coming into the premier class. The modifications that Honda have made to the 2015 machine haven’t sat well with Marquez, and whilst the Yamaha and Ducati have come on leaps and bounds, Marquez is in danger of being left behind.

Despite the very public problems Honda are having, and starting today’s Italian Grand Prix from 13th position, a lightening quick start from the World Champion saw him climb as high as second, before becoming in a race long battle with Andrea Iannone for second position. It was five laps before the end, when Marquez lost the front end of his Honda, and ultimately crashed out of the race.

“It was a shame about the crash today, because I had already done the hardest part,” admitted Marquez after the race.

“I’m happy because I was able to carry out our plan, which was to try to recover positions on the first five laps. We were up into second place after four laps, but when the tyre grip went down we had a similar problem to before, with the tyre sliding on corner entry. I was on the limit and when you are pushing at the maximum sometimes things happen like they did today.”

He continued, “we have dropped quite far behind in the standings, but Honda are working hard and together we will keep pushing to improve the feeling with the bike for the second half of the season.”

Despite being nearly two race victories worth of points behind Valentino Rossi, neither Rossi nor Jorge Lorenzo ruled Marquez out of the title hunt. Although Marquez would have to go on a kind of run similar to what he did last season, winning ten races in a row.