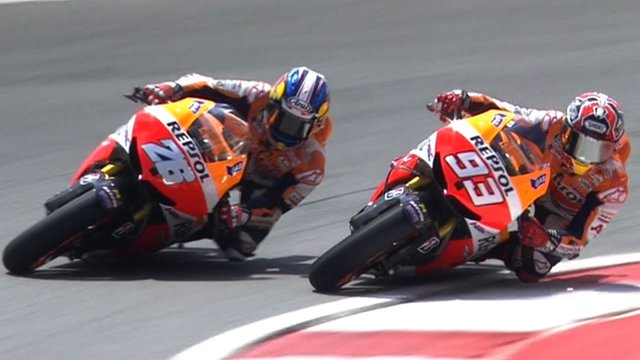 Dani Pedrosa was speaking to Catalan radio after the race in Mugello, and the Spainard claimed his younger team mate had copied his set up, after his bikes were ruined in crashes earlier in the week.

Marquez would’ve gone on to finish in second position ahead of Pedrosa had he not crashed out of the Grand Prix with three laps remaining.

“Marc’s race was incredible after crashing so hard on Friday, and he was going very strong, but we know that he copied our set-up,” said Pedrosa.

“They gave his team all the information that we gathered yesterday (Saturday) in order to improve traction and that made things easier.”

Whilst there isnt a ban on data sharing in MotoGP or within the Repsol Honda garage, it appears Dani Pedrosa is a little upset about his hard work assisting a championship rival.

This is bound to upset Pedrosa’s team manager Alberto Puig who has openly said he would like to limit the amount of data sharing that takes place.

Pedrosa now heads into his home Grand Prix in just under two weeks time still at the head of the championship, leading reigning World Champion Jorge Lorenzo by 12 points.