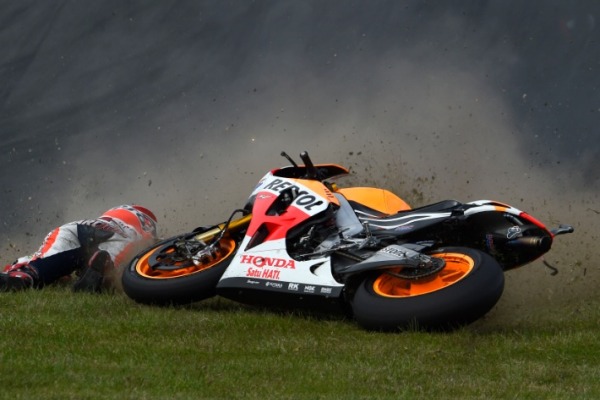 When a rider crashes out of a four second lead, they are usually very angry and very upset. This was not the case however with reigning World Champion Marc Marquez, who simply laughed off his mistake after crashing out of the lead during Sunday’s Australian Grand Prix at Phillip Island.

Marquez looked set to equal Mick Doohan’s record of 12 victories in a single season, on the same weekend that Doohan had a bronze bust erect of himself at Phillip Island, but he threw his 4.1 second lead down the road along with his Honda RC213V when he crashed out with 10 laps to go at the MG corner.

Despite crashing out, Marquez was not angry that he had thrown away the chance of another victory, he explained that it was his own way of trying things out, something he will learn from for 2015.

“Just I was trying to do a different kind of race,” said Marquez speaking after Sunday’s race. “I was pushing a lot from the beginning, but then from the middle of the race I saw it was getting colder and it was so difficult to get temperature on the right side [of the tyre].

“The crash was so strange. Like Crutchlow, like many riders. Because on that brake point I was even slower – we compared the data – but the front locked. The crash was exactly the same as many others.”

Tyres was the subject of the day once again in Phillip Island, and Marquez’ crash was exactly the same as other riders who had elected to use the new asymmetric tyre brought to Australia by Bridgestone.

“We knew there was some risk with this tyre because yes it was asymmetric, but the part in the brake point was the ’33’ compound, the hard side,” he said. “But the problem is that with Honda it was impossible to finish the race with the ’31’ [extra soft]. Even Lorenzo seemed to struggle. With Honda the ’31’ was already destroyed after ten laps and for that reason we didn’t have more options.”

The 21-year old explained that he was trying a new race strategy this weekend. With the title already sewn up, Marquez said he was trying to push hard at the front, and break away from his opponents, so he can relax for the final laps of the race, as opposed to keeping it close, and eventually pushing through with 10 or so laps to go. Marquez executed the first part of his strategy to perfect, taking the lead, and getting over four second ahead, but the backing off is what may have eventually cost him his twelfth win of the season.

“On the first laps in the brake points I was pushing really, really hard. But then I tried to brake earlier and maybe that didn’t warm enough the tyre and for that reason I crashed,” explained the double World Champion. “But when I saw four seconds in only 15 laps, I saw that I was doing a great race…”

“I was trying to do Doohan style! But in the end I did like Doohan when he was leading this race and in the first corner he crashed,” laughed Marquez with his trademark grin.

“I tried to push a lot from the beginning, from the first lap, to open a gap and I was able to do it. Then at the easiest point I crashed. The important thing is that in the most difficult point, the first part of the race when normally Yamaha is strong, we were really strong.

“We got experience for next year but of course riding without pressure, you try different things and sometimes things can happen.”