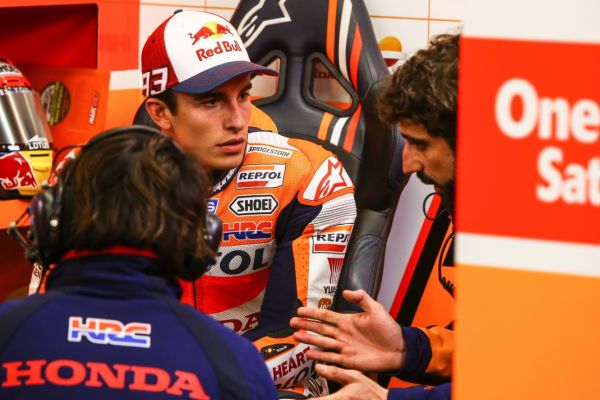 Reigning World Champion Marc Marquez was plagued by front end issues as he looked to get his title defence back on track, today in Le Mans.

Marquez started the French Grand Prix from pole position, but never looked comfortable on his Honda RC213V, and that was down to issues at the front end of his bike. The higher temperatures caused major issues for Marquez, and problems he wasn’t expecting.

The World Champions’ issues seemed to be evident right from the start of the race, when after being squeezed out, he lunged into the first chicane, overshooting it massively, and falling down the field, whilst Lorenzo rode off into the distance.

Marquez fell down as low as eighth at one point, but as the race went on, Marquez managed to recover and salvage a fourth place finish. It turned out to be an impressive finish, with all Honda riders struggling with front end issues, with Dani Pedrosa, Cal Crutchlow, Scott Redding and Jack Miller all crashing out.

“Today the temperature rose sharply; we had not ridden in such conditions at any time this the weekend,” Marquez said after the race.

“On the fourth lap I started to notice that I had a lot of problems with the front end. I think all the Hondas had the same trouble; in fact a lot crashed after losing front grip because we were really suffering.

“We knew that with a rise in temperature, conditions change, but we expected it to be for the better and this time it was for the worse. We must learn from this race and especially from the data we have gathered.”

Marquez now finds himself 33 points behind championship leader Valentino Rossi, with the paddock heading to Mugello in a fortnights time.