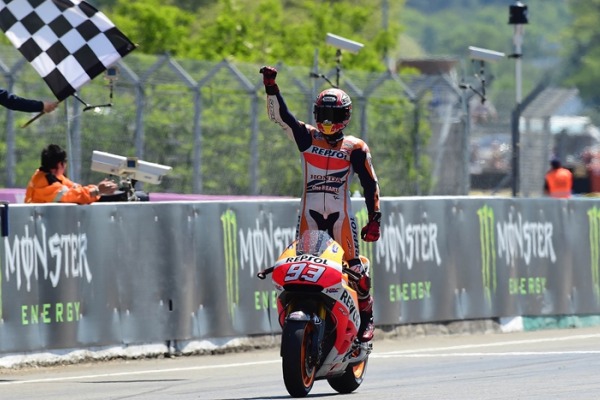 Current MotoGP run-away leader Marc Marquez put in another dominant display to continue his 100% start to the 2014 MotoGP season in Le Mans, making him the first rider to win five races from pole since Mick Doohan did on the Honda in 1997.

Marquez was joined on the podium by Valentino Rossi who bettered his team-mate for a second time in two races, and by Alvaro Bautista who will hope his Le Mans podium will be a turning point after a tough start to the season.

Marquez made life a little harder for himself this week, as he produced a superb fightback through the field in the first half of the race, before eventually taking the lead from Valentino Rossi 11 laps before the finish, despite being as low as 10th on the first lap.

“I enjoyed today quite a lot, especially after the first lap,” said Marquez. “On the first lap maybe I was too calm, I knew my rhythm was so good, so maybe I had too much confidence. Then when Lorenzo overtook me, I went a bit wide, outside the track and then many riders passed me. “But after that I was able to do some great overtakes and when I saw Rossi started to open a small gap I pushed 100%. I enjoyed it a lot. When I reached Valentino I thought it would be a fight to pass him, but he made a mistake and went wide, which allowed me to get through. Then I pushed to open a gap. “I’m really happy for my fifth victory in a row, and I want to enjoy this moment as even though it looked easy, it was so difficult to get the win… we will not win every race so sometimes we must just finish on the podium.”

Pol Espargaro rode superbly to fourth place, and managed to survive a late serge from Dani Pedrosa for his best results in the MotoGP class to date. Pedrosa clearly showed signs of his recent arm pump surgery.

Jorge Lorenzo’s miserable start to the 2014 season continued as he finished three seconds behind Pedrosa in sixth position, leaving the two-time MotoGP World Champion understandably frustrated, further fuelling speculation this may be his last year with Yamaha.

Stefan Bradl finished seventh, and the German was also on the mend after recent arm pump surgery, and finished ahead of a great battle between Andrea Dovizioso, Aleix Espargaro and Bradley Smith, with the Italian beating the Spaniard and the Brit to the line.