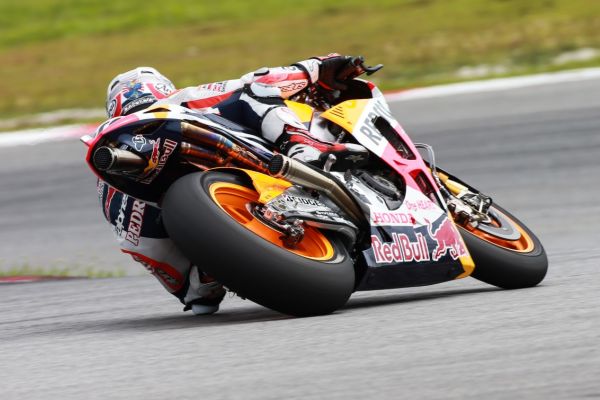 Repsol Honda rider Dani Pedrosa hasn’t recovered from his arm pump surgery in time to race at Jerez this weekend.

Pedrosa’s admission that he won’t be racing this weekend has come as a slight surprise after Repsol Honda team principal Livio Suppo had said he hoped to see the Spaniard back this weekend in his home round. Pedrosa was testing his arm out on a supermoto bike in an effort to assess the condition of his arm.

Unfortunately for Pedrosa he wrote on his Repsol blog that his arm hasn’t recovered in time. Pedrosa sat out of the Texan and Argentine rounds hoping that it would speed recovery on his arm. He suggested he could’ve ridden in Jerez, but felt it would serve better purpose to wait until his arm was 100%, allowing him to race to his full potential for the remainder of the season.

“I wanted to write to you guys and give you good news but unfortunately I can’t, as I won’t be in Jerez,” said Pedrosa. “Yesterday I tried to ride a supermotard bike to check my arm. Even though at first it felt OK, after riding my forearm still didn’t feel 100%.

“I know that if I do a whole race by the weekend it will be much worse, and the last thing I want is to create another big problem. So it has been a very difficult decision to make, but I think the best is to wait a while longer, go ahead with the rehabilitation and be back in Le Mans.

“Thank you to everybody in my team, who I’m missing a lot, and to all my fans who are supporting me in this moment. Your support is always appreciated, but in difficult moments I truly value everything you do for me.”

Honda test rider Hiroshi Aoyama will continue to deputise for Pedrosa in the Repsol Honda team this weekend. HRC will be hoping that Marc Marquez’ broken finger won’t prevent him from riding. Marquez will ride on Friday morning, and assess the condition of his finger from there. Should Marquez fail a fitness test, Honda wouldn’t have the time or feel an obligation to field a replacement rider.