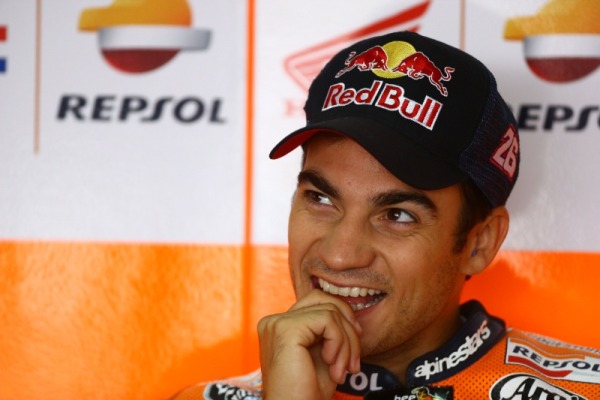 Dani Pedrosa will stay with the Repsol Honda MotoGP for another two years, after signing a new two-year contract with HRC.

Pedrosa’s new contract was expected, and will see the Spaniard remain with Repsol Honda for a tenth and eleventh year, keeping him in the team he has raced for since joining MotoGP back in 2006. Along with team mate, and World Champion Marc Marquez’ contract extension, the Repsol Honda team will remain unchanged until at least 2017.

Despite some interest from Suzuki, and to a lesser extent Yamaha, Pedrosa’s extension was widely accepted and expected with a new two year contract filling time until the likes of Alex Marquez, Alex Rins and Maverick Viñales are ready for MotoGP.

“I’m very happy to be able to announce my renewal with the Repsol Honda Team, and grateful to Honda for the trust they have shown in me for for a further two years,” said Pedrosa.

“It’s the best way for me to continue in my racing career, together with the company I was with in my very first race. I am very excited to give my 100% and continue to work together with everyone at Honda Racing Corporation.”

Despite not winning a MotoGP World Championship since his move up eight years ago, Pedrosa’s renewal is a very clever move by HRC, which will keep an experienced and fast rider alongside Marquez for another two years as MotoGP makes more changes in the coming years with a control ECU and Michelin tyres being introduced. Pedrosa’s development skills should help HRC and Marquez in 2016 when the changes are implemented.

“We are very pleased to renew our contract with Dani,” said HRC vice president Shuhei Nakamoto.

“He is enjoying a very strong season and is currently tied with Rossi in the Championship, we are very happy with his performance. The partnership of Dani and Marc has proven to be successful and we look forward to another two years of success.”