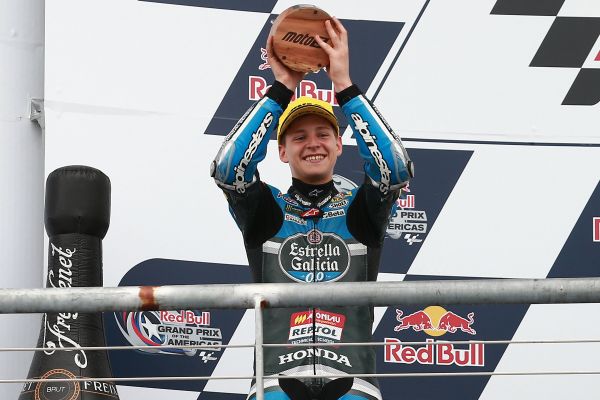 The past weekends Texan Grand Prix saw the Frenchman claim his first podium, with a remarkable second place finish behind the dominant Danny Kent. It was Quartararo’s first time of seeing the Circuit of the Americas, and on the back an impressive display at the Losail International Circuit, Quartararo showed he isn’t having trouble adapting to new circuits.

This weekend’s Argentine Grand Prix at the Circuito Termas de Rio Hondo, will be Quartararo’s final race as a 15-year-old, and it will also be the final race, for the time being, at a circuit he doesn’t know, with three of the next four rounds at circuits he has previously won at.

After Argentina, the paddock returns to Jerez, before heading to Le Mans, Mugello and Catalunya. He was victorious last season in Jerez, Le Mans and Catalunya, and holds lap records in Jerez and Catalunya, which could see him really mount a title challenge.

The Estrella Galicia 0,0 rider was delighted with his Austin podium, but it ready to get back to work in South America.

“The podium in Austin was a great way to prepare for the Grand Prix in Argentina,” Quartararo said via speedweek.com. “This result is great and a lot of confidence and motivation, but Argentina will be another new track for us.”

“We have to work just as we have in the first two races. I have studied the video of last year and I’m learning the circuit on my games console. I’ve imprinted the braking points with references. The track looks tricky to me, but with lots of variety. There are lots of fast corners where you still ride a lot. I can’t wait any longer.”