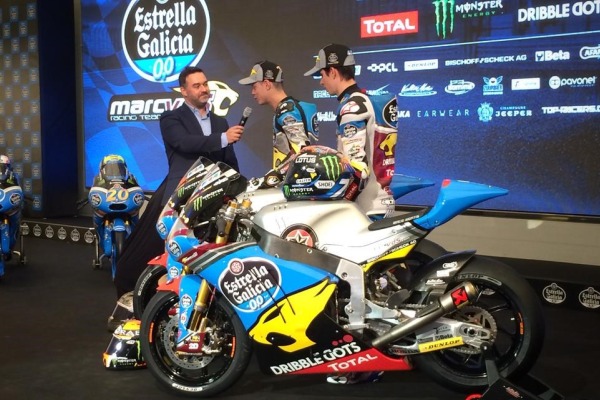 The event saw riders from five classes as part of the new links between Marc VDS, Estrella Galicia and Monlau Competicion all unveil their bikes for 2015, with the top bike being Scott Redding’s 2015 factory Honda RC213V.

Redding, who is once again racing under a Marc VDS banner after one year away from the Belgian outfit, will be getting his first bite at the MotoGP cherry with a factory bike, and the 22-year-old was on hand today to show off the new blue and silver livery.

Redding’s highly publicised move back to Marc VDS came about when he managed to leave half way through his two-year Gresini contract, after the Italian team switched from Honda to Aprilia for 2015. After Marc VDS finally secured sponsorship, in the shape of Estrella Galicia 0,0, they managed to bring their favourite son back on board.

“I’m really happy to be on a team where I am the only rider, it’s something I had always dreamed of, as all of the teams efforts will be focused solely on me,” Redding said in Madrid.

“I’m happy to be back with Marc VDS, as I already know the team and that can only help us achieve good results this season. We still have some work to do to close the gap to the leading teams before we get to the first race in Qatar, and must learn from the guys who are faster than us.”

Scott Redding and the 2015 Factory Honda he’ll campaign in 2015 pic.twitter.com/F30QKUxmoS

Redding ended the two pre-season tests in Sepang in 17th and 16th places respectively, but admitted to struggling to adapt initially to his RC213V, but did say he is confident he is and his team can solve the problems that have plagued them thus far.

Redding and the team have one more pre-season test at the Losail circuit in Qatar a week before the season starts.