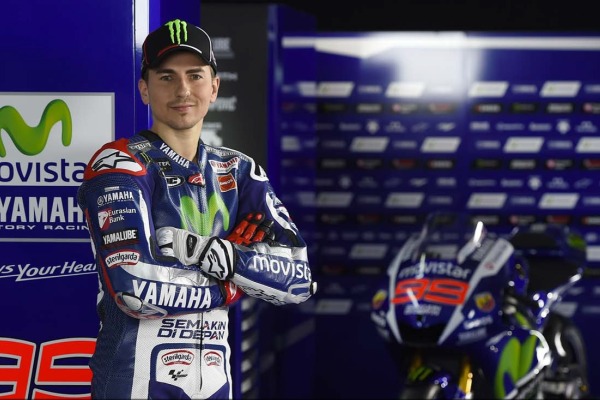 Two-time MotoGP World Champion Jorge Lorenzo deems both reigning World Champion Marc Marquez and team-mate Valentino Rossi favourites for the world championship over him ahead of the 2015 MotoGP season.

Lorenzo was in action today at the launch of the 2015 Yamaha YZF-M1 where he discussed the new bike, and his chances ahead of his eighth season in the premier class in motorcycle racing. The Spaniard held his cards close to his chest, and was modest and cautious speaking of his chances ahead of the 2015 season, admitting that he doesn’t know how the new M1 will perform until he gets it out on the track in Sepang next week.

“We don’t know until we start the first practice of the year,” the 27-year-old said during the presentation in Madrid.

“We don’t know at what level the M1 will be at Sepang but I am sure our engineers have worked hard to make it very fast! I know already I should not expect improvements of a second per lap, but I am very positive and optimistic.

“Last year I certainly was not [a title contender], because I was never there in the first races because of the mistakes. I prefer not to assume the favourite role because I’m not this time. I think the final result of the championship was in line with how the season went.

“I think Marquez should be the favourite, and then Valentino. Dani and I are behind until the opposite is proven.”

2014 was statically Lorenzo’s worst season in MotoGP since his rookie season in the premier class, ending the season behind both Marquez and Rossi. He mentioned how he didn’t see himself a strong title contender because of his early mistakes. But he also admitted that his preparations into last season meant he started the season on the back foot. A series of surgeries and a disrupted training plan meant he started the season 3/4kg overweight, and it wasn’t until the summer break, which he worked tirelessly through, that he managed to get himself back to more recognisable surroundings, such as the top step of the podium.

Going into 2015, the Majorcan admitted he had never worked as hard as he has this offseason, to avoid the same mistakes as 12 months ago.

“I think I’m in much better shape,” he said. “Physically I’m stronger from training because we have been focusing on the best workout sessions and I have not had to undergo surgery as occurred in 2014. Until I get on the bike and see how it’s going I prefer to be cautious and see what happens.

He continued, “last year I decided to change trainers because at the end things were not going as I wanted. Now I’ve found my balance with my new coach from Argentina and have been working conscientiously for this season, so I hope to get better and not make the mistakes of the past year.”

Now at 28, Lorenzo has matured, and become more aware of all the factors that make a championship winning team come together, and he was pragmatic when asked what his expectations were ahead of this season.

“Well, as I always say I can’t guess the future, the future is uncertain for everyone and especially in sport and in motorcycling where you never know what can happen. Obviously you can prepare well and have more options to get a better result than if you do not but ultimately many factors affect whether you are the best and battling for the title.

“Last year the bike got better and better and in the second half I was able to take podiums. If we continue improving and other factories do not give many steps forward I think we can start strongly.

“You never know if winning is enough but at least staying constantly on the podium will mean finishing high up in the World Championship.”

Lorenzo will get his first taste of his 2015 M1 next Wednesday when the winter end comes to a highly anticipated wait in the Malaysian humidity.