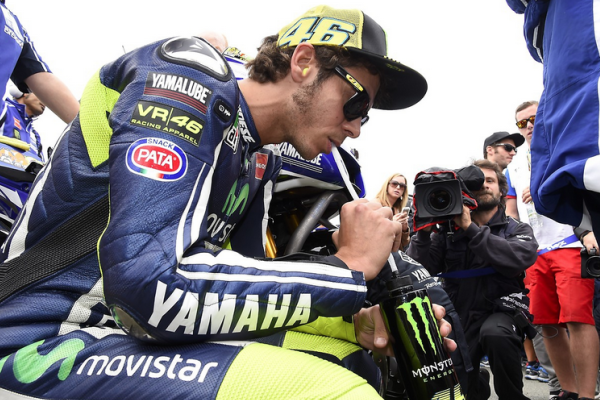 Yamaha and Monster Energy have signed a two-year contract extension to remain partners, in spite of speculation Monster were ready to end association with the Japanese brand.

Plenty of rumours were spread over the 2014 season that Monster were unhappy with the similar looking Movistar logo dominating the Yamaha fairings. Movistar became the main sponsor of the Yamaha Factory team for the 2014 season, and confusion over the two respective brands trademark M’s reportedly upset the American energy drink.

The rumours suggested that Monster were ready to pull the plug on the deal, but still keep their personal sponsorship of Valentino Rossi and Jorge Lorenzo.

However, the Movistar Yamaha team have signed a two-year contract extension with the American brand, extending into their title sponsorship of the Tech3 team.

“Monster remains as a sponsor, they have extended the contract for two years,” Yamaha Racing Managing Director Lin Jarvis. “Their participation will be the same as in 2014. There were no problems between Movistar and Monster Energy.”

In other sponsorship news, HRC have signed a two-year contract extension with Italian exhaust manufacturer Termignoni. Termignoni, who have made exhausts for HRC since 2011 in the MotoGP World Championship. Repsol Honda Sporting Director Livio Suppo said: “We are delighted to continue our partnership with Termignoni to 2016. Together we have already celebrated great successes. I hope that we will do so for many years.”

Whilst the satellite Pramac Ducati team have signed an agreement with American lubricant WD-40. WD-40 won’t be a title sponsor for the Pramac team for 2015, but will be seen in the boxes and on the bikes of both Danilo Petrucci and Yonny Hernandez.