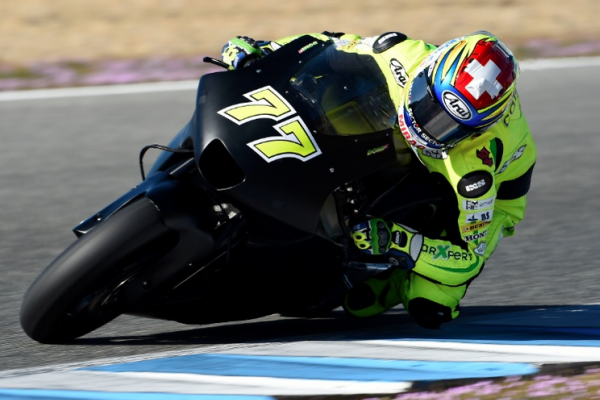 Today marked the end of the winter break for world road racing, World Superbike teams and stars were in action at Jerez today, and they were joined by Dominique Aegerter and the Kawasaki prototype MotoGP machine.

Last week, we explained how Aegerter was going to be in action with Kawasaki, testing the new prototype machine, and today more details were revealed about the current prototype bike Kawasaki are testing.

It has come out that the test is being run by French tuning company Akira. Akira have worked with Kawasaki in a MotoGP capacity before, suppling engines for the Avintia team when they were running ZX-10R engines in MotoGP. Aegerter also has previous with Akira. He worked closely with them when he tested the Avinita machine in Catalunya last June.

Aegerter admitted to being confused as to Akira’s involvement, and many are still under the impression that Kawasaki are still heavily involved in the project due to the extreme cost of the project.

The tyres that were being run were Spanish Championship Michelin’s. There had been some confusion as to whether they were Moto2, or Superbike tyres. But either way, the Michelin tyres that were run were not to the same specification to those that will be run in MotoGP in 2016.

The tyres were seen to be the biggest problem today. Aegerter’s bike wasn’t fitted with a transponder, and he couldn’t reveal his lap times, but he did admit to the tyres meaning the time wasn’t ever going to be close to what the MotoGP machines achieve around the same circuit.

Aegerter also admitted to speedweek.com that the bike also has next to no electronic aids, prompting further speculation that Kawasaki are considering a return in the not too distant future.

Kawasaki have been absent from MotoGP officially since 2008, with the intention of focusing on the World Superbike effots. However, cost efficient measures, as well as the return of Suzuki and Aprilia this season, and KTM in 2017, it would be a shock if Kawasaki weren’t using this test as a gauge to see where their project currently stands.