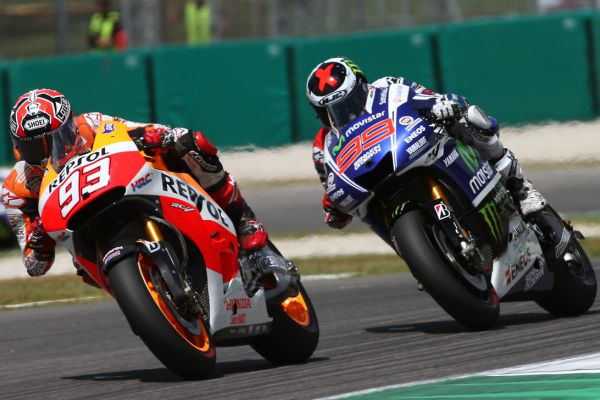 Marquez dominated the 2014 season, after pipping Lorenzo to the title in 2013 by just four points. 2014 was a season to forget for Lorenzo after his first lap crash under the floodlights in Qatar was followed up by his horrific jump start in Texas. All told, Lorenzo found himself 44 points behind Marquez after just two rounds of the 2014 season.

Whilst Lorenzo’s second half of the season form was blistering, he had a run of ten podium finishes in a row, before conditioning errors in his preparation for the flyaway races, and his DNF at the season finale in the challenging conditions in Valencia, meant the former World Champion he ended the season in third place, 99 points behind his young rival.

Lorenzo’s change of fortunes in the second half of the season was enough evidence to Marquez to suggest he poses the biggest threat between himself and a third title next season.

“Lorenzo’s biggest mistake was the first part of the season, especially until Mugello because after that he was strong,” the Spaniard recently told Motorcycle News.

“But he lost so many points before that it was always going to be hard to get those points back. You never know with Valentino. I didn’t expect his level. I expected more like last year but he will be there because his motivation is there and Dani is always constant.

“Maybe he won’t be better or worse than you but he will always be there and you need to pay attention with him. But I expect Jorge will be the strongest rival.”