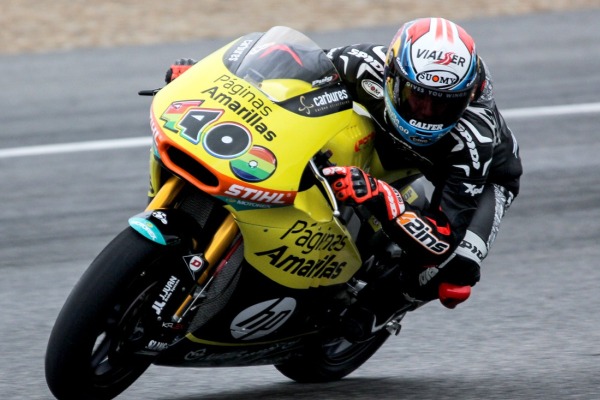 Alex Rins enjoyed his first test on his Pons Kalex Moto2 machine in Jerez, even if the weather did hamper the amount of dry running he could manage.

Rins has moved to the Moto2 World Championship on the back of second place and third place finishes in the 2013 and 2014 Moto3 World Championship respectively. He could not keep pace with his team mate or Jack Miller in 2014, but still managed to win two races, and stand on the podium a further six times in 2014.

The Paginas Amarillas HP 40 team, run by Sito Pons awaits him for next season, and his championship rival from 2013 Luis Salom will be his team-mate.

Rins was in action with the majority of the Moto2 grid at the latter end of last week in Jerez, but his two day test was hampered by inclement weather, meaning Rins couldn’t get the full experience of his 2015 machine.

“We had very little time on a dry track – only about two hours. That was a problem,” Rins said to speedweek.com, about his first test in the wet last week.

“In wet conditions I felt surprisingly good. But I could already see that the Moto2 bike is completely different than a Moto3 machine.

“As soon as I opened the throttle, and the rear tyre starts to slide. I like that a lot, its a lot of fun.”

Rins is back in Valencia now, where he has just finished his first day of testing back at the Circuit de Ricardo Tormo, where the weather is much better.

“The weather is better. The forecast looks good. After I was only able to ride in Jerez a little, I don’t expect this to be the case in Valencia.”