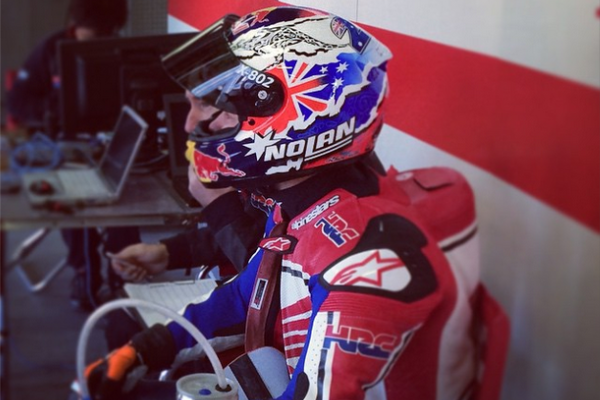 Former MotoGP World Champion Casey Stoner threw his leg over a MotoGP bike once again today as part of a two day test with HRC in Motegi.

Today Stoner tested next season’s full factory, and customer bikes in Motegi, but on the current Bridgestone rubber. He will then use tomorrow to continue to test, but he will be using the Michelin tyres that will become mandatory once they become the sole tyre supplier to MotoGP in 2016.

HRC will be hoping that the former double MotoGP World Champion will be able to provide them with some valuable insight and feedback ahead of the tyre switch in 2016.

Suppo was quick to nip in the bud any rumours that Stoner is on the verge, or even considering a possible return to the sport he walked away from at the end of 2012.

“As we said earlier in the year the test has been organised with him after we lost some test time last year due to bad weather. So we’ve put together this two-day test, but for now there is no other test program planned. We prefer to take a day-by-day approach.”

The two day test passed with glorious weather in Motegi, and Stoner today completed the test, testing the new Michelin tyres for 2016.

“It took some time to get used to riding the bike again after a year off it,” said the Australian. “But everything felt good, I got back into the swing of things pretty quickly and we just got on with the testing programme HRC had planned.

“Day one went pretty well, testing both Marc and Dani’s setups on the 2015 prototype machines and analysing these side by side we found some interesting differences and useful data. We also did some engine development and some other new items Honda brought for this test. Then today we spent some time on the Michelin tyres for 2016. All in all it was very positive two-day test and we completed a lot of laps.”

With it being a private test, HRC won’t be releasing any official times from Motegi, but should any times get leaked we will let you know.

@official_cs27 exiting the pits in Motegi