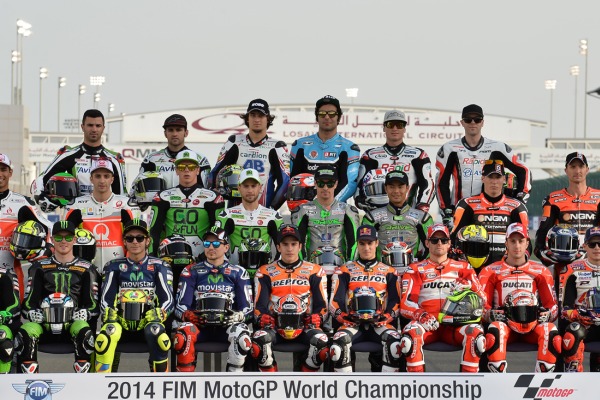 The provisional entry list for next seasons MotoGP World Championship has been released today, and there are no real surprises, with seats still to be assigned.

The Factory Yamaha and Honda teams have their current four riders all signed up for next season, as well as the Monster Yamaha Tech 3 team keeping Smith and Espargaro for 2015.

The Factory Ducati team has seen Cal Crutchlow replaced with Andera Iannone, who will join compatriot Andrea Dovizioso in the Factory squad.

Crutchlow will be on the LCR Honda bike next season, alongside rookie Jack Miller. Whilst Scott Redding will have the final Factory Honda with his new Marc VDS MotoGP outfit.

Stefan Bradl and Loris Baz are two new riders for the NGM Yamaha Forward Racing team. Eugene Laverty makes his return into the Grand Prix paddock alongside Nicky Hayden in the Aspar Honda squad, too.

There are two new manufactures on the grid next season. Suzuki have confirmed their full time return for 2015 and have Aleix Espargaro and rookie Maverick Viñales for next season. Whilst Aprillia officially return in a factory capacity too. Alvaro Bautista is signed up, but the seat alongside him is one of the current unclaimed seats.

The second unclaimed seat is that of the IODA Racing project, with long term rider Danilo Petrucci leaving and joining Yonny Hernandez in the Pramac Ducati team.

The Avintia team is the only other unchanged team, but next season both Barbera and Di Meglio will be running Ducati’s rather than the Kawasaki’s from this season.

You will also see Jack Miller has taken the number 43 with his usual 8 being taken by Hector Barbera.
Provisional 2015 entry list