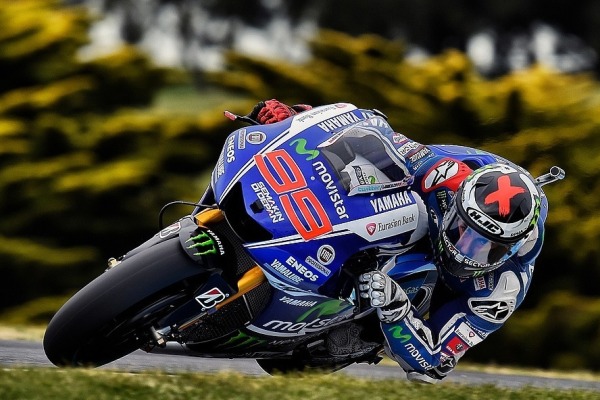 Jorge Lorenzo was left frustrated in Phillip Island as a bad front tyre cost him a chance of claiming his third consecutive MotoGP.

Lorenzo started the race quickly, and found his way to the front of the field early. However, even before half race distance it became clear that Lorenzo was having problems with the super soft front tyre he had chosen to use, rather than the asymmetric tyre that race leader Marc Marquez was using.

Despite Marquez and Cal Crutchlow who had caught and passed Lorenzo crashing out using the soft asymmetric in the closing stages of the race when temperatures dropped, the former World Champion admitted that every lap was a drama, especially through the left handers, with the rear tyre spinning up whenever he put the power down.

That high attrition rate of the race meant that despite having a ‘disaster’ of a front tyre, he was able to claim second place, and help contribute to a Yamaha 1-2-3, the first one since Le Mans in 2008.

“It is a great result for Yamaha because it has been a long time since Yamaha has been 1-2-3, but I am [personally] very, very disappointed because you work a lot to make the best set-up and everything seems well, but you sometimes get these tyres which are a complete disaster,” said the Mallorcan after the race.

“On the right it was perfect and I could catch Vale a lot but when I arrived into a left it was a disaster. Every lap was worse and the last laps it was a drama to stay on the bike in fifth, sixth gear. I managed to stay on the bike, finish the race and I was very lucky – this is probably my luckiest second place.”

Lorenzo is now eight points behind team mate Valentino Rossi in the hunt for second place in the World Championship standings with just two races to go.

Bad luck with the defective tyre but very lucky with the result! #keepfighting pic.twitter.com/XlHo2JiWqK