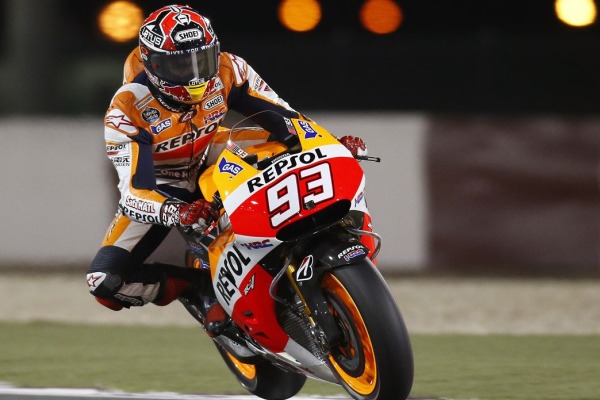 Defending World Champion Marc Marquez overcame a charge from Valentino Rossi to claim a huge win in the season opener in Qatar.

The Repsol Honda rider was outstanding holding off the nine-times World Champion despite only weight bearing on his broken leg just last week to take an early lead in the Championship after main title rival Jorge Lorenzo crashed out in spectacular fashion.

Jorge Lorenzo crashed out of the race lead at turn 15 on the first lap, after a great start leaping from fifth to taking the whole-shot in the first corner. Lorenzo will need to come out fighting in Austin after starting the season with a DNF. On lap eight Stefan Bradl suffered the same fate as Lorenzo by crashing out of the lead since inheriting the lead after Lorenzo’s fall. Despite the fall the German will be buoyed by his race pace, and his ability to hold of Rossi and Marquez before his crash.

The Marquez and Rossi battled then unsued. The Doctor stalked Marquez until with two laps to go he made his move on turn six. Marquez hit straight back two corners later, and the pair battled all the way to the line, with the 21-year-old ultimately having too much pace for Rossi, but it was positive for Rossi after his lack of pace in practice and qualifying. Dani Pedrosa completed a quiet race three seconds back to complete the podium.

Aleix Espargaro was fourth place on his debut for NGM Forward Racing and was the first of the new ‘Open’ bikes. Espargaro had benefited from crashes for Alvaro Baustista and Bradley Smith who both crashed out in front of him in the final five laps chasing podiums.

It was a quiet if not productive race for Ducati duo Andrea Dovizioso and Cal Crutchlow who finished the race in fifth and sixth respectively. The pair also benefited from crashes ahead of them, but they both made the finish, even if Crutchlow looked like he had run out of fuel as he was crossing the line.

It was a great result for Scott Redding on his debut in the MotoGP class as he beat fellow ‘Open’ Honda rider, and 2006 World Champion Nicky Hayden to seventh by a 0.035s margin. Redding had targeted Hayden as the man to beat, and he achieved that in stunning fashion.

The top ten was rounded out by Colin Edwards and Andrea Iannone who came back through after a crash on the last corner of the second lap.

The riders will next be in action in a fortnights time as the whole paddock goes across the Atlantic and sets up camp in Texas for the Circuit of the Americas.