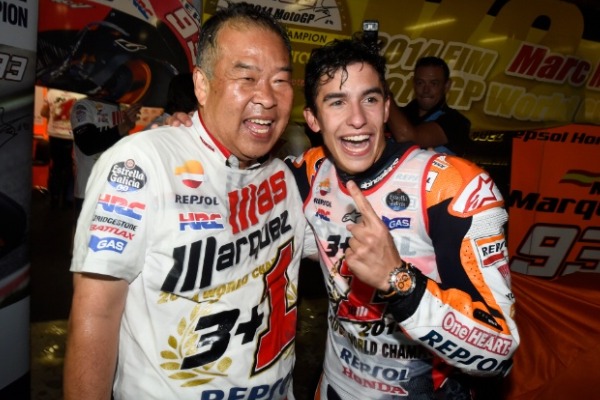 2014 MotoGP World Champion, Marc Marquez, has hinted that the next three races he will try new parts for the 2015 Honda RC213V with the title already sewn up.

Marquez said that with the title won, the next three races won’t be as special for him, meaning could potentially test new parts for Honda if they wanted to get them tested in a race environment ahead of next season.

“These last three races are ok not important for me like the other ones, but maybe for Honda they are more important,” Marquez said at Phillip Island during the pre-race press conference.

“Because now maybe we have the chance to try special things for next year, or try different things, thinking about 2015.”

He did stress that a whole new bike couldn’t be run this season, due to the engine development restrictions that were implemented with the open class rules for this season. With it not possible to run the 2014 engine inside a 2015 chassis any chance of having a 2015 version RC213V for this season isn’t viable. That doesn’t mean that he can’t test certain elements of the 2015 bike.

He continued: “It is not possible to race the 2015 bike because next year the engine changes a little bit and it would [also] be really expensive to adapt the engine we have now to the new [2015] chassis. We already spoke about this at Brno.”

“Just I will try maybe some options, if they will give me something, but if not we will race with our current bike until the end of the year.”