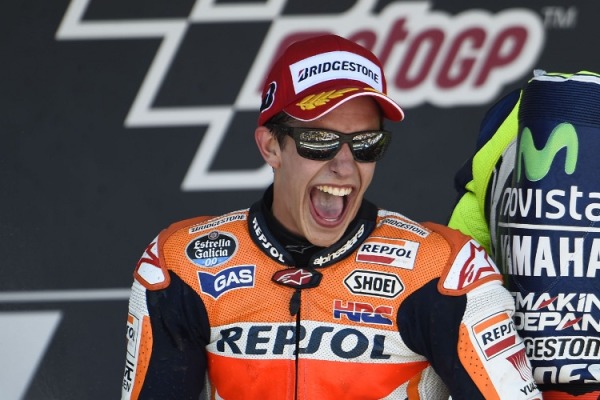 After his first DNF of the season last time out, world champion in waiting Marc Marquez is heading home to Aragon, which rather ominously for his rivals he describes his favourite track.

Marquez is still enjoying one of the greatest ever seasons in MotoGP history despite his spill in Misano, where he sits 74 points ahead of team mate Dani Pedrosa and 75 ahead of winner last time out Valentino Rossi.

What his crash last time out does mean, is that he cannot mathematically win the MotoGP World Championship in Aragon, where last season he claimed a controversial win. He was in third place and accidentally severed a traction control sensor, causing Pedrosa to high-side and all but end his title chances.

“After a disappointing weekend in Italy, it will be nice to return home to race in front of our home fans in Aragón this weekend and also my fan club will be coming!” said Marquez, who re-joined to finish 15th at Misano.

“This is my favourite track of the year and we’ve had good results here in the past three years so I hope to continue this way. It has technical first and final sections, and you need to be strong in cornering, but we will be working hard from Friday to be back on top on Sunday!”

Should Marquez win in Aragon he could be potentially just one more win away from claiming his second MotoGP world title before his twenty second birthday.