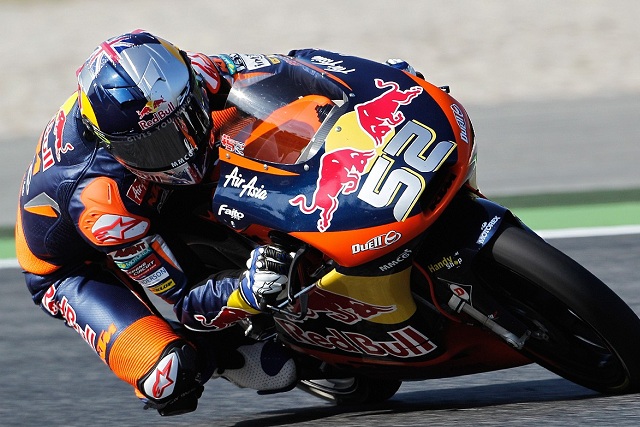 The 20-year-old Brit is returning to the Moto3 class after a testing year in Moto2 with the Tech-3 squad, and has been dubbed as one of the favourites after his success with the Ajo team back in 2012, which saw him win two races on his way to finishing fourth in the World Championship.

But with 2013 champion Maverick Viñales and title contenders Luis Salom and Jonas Folger moving up to Moto2 with the Pons and AGR teams respectively, Alex Rins will be the obvious choice for the title.

Along with his new team mates, Jack Miller and Red Bull rookies champion Karel Hanika, Kent will be strong. With both Rins and Marquez moving from the KTM to the Honda next season, it will be all be very close once again next season.

In an interview with British ‘paper Motorcycle News, Kent said; “Jack [Miller] was the fastest Honda and he did a great job and immediately he has been fast on the KTM, so he will definitely be one to watch out for.”

He was keen to highlight the fact that Rins and Marquez will take time to adjust to the Honda’s from the KTM.

“Rins and (Alex) Marquez were fast on the KTM but right now nobody knows what the Honda is going to be like,” he said. “It will be hard to predict with them but there’s no doubt if the bike is good they will be there.”

Kent also identified the dangers that come beyond the top two teams. With two young Italians looking to spear head a new generation of Italian stars.

“But every season there is always someone that will surprise you and is in contention that you perhaps didn’t expect and I think that could be Antonelli or Fenati. Now they are on a KTM they will be fast.”