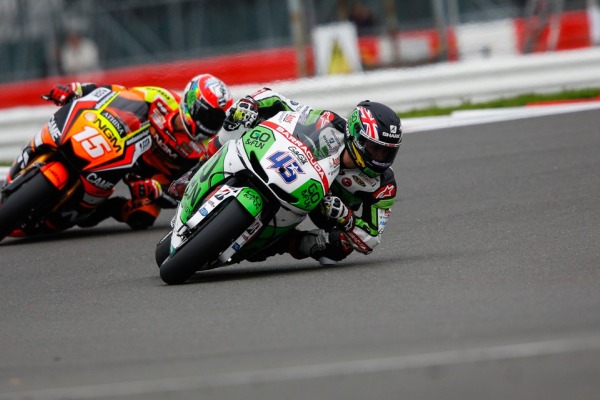 Scott Redding enjoyed a successful first day at his home Grand Prix at Silverstone, as he ended the first day of practice in sixth place aboard his GO&FUN Gresini Open class Honda.

Redding, who won the British Moto2 Grand Prix last season, continued his good form around the Northamptonshire track as he ended the day top production Honda, and ahead of the likes of Valentino Rossi, Jorge Lorenzo and Cal Crutchlow. Redding’s best lap time of the day was a 2’03.333 and that was good enough for sixth position and 1.207 seconds behind Friday’s fastest man Marc Marquez.

Yonny Hernandez was the fastest open class rider, but his best time of the day was only 0.006 seconds better than the Brit’s who also topped full RC213V riders Dani Pedrosa and team mate Alvaro Bautista.

“This morning I was struggling a little bit, but then this afternoon I felt really comfortable with the bike and with the circuit, I got a good rhythm and I started to enjoy riding,” Redding told the official MotoGP website.

“I didn’t expect to be so fast today, so I’m happy with the job we’ve done so far.

“I got a really good result today, so the target for tomorrow is to get into the Q2 session, but I’m not sure if we can make it, if the temperature is coming up. Anyway, I will keep pushing and pushing!” he added.

Redding was 1.4 seconds ahead of the next best placed Open class Honda bike, which was in the hands of Hiroshi Aoyama and his Aspar team.