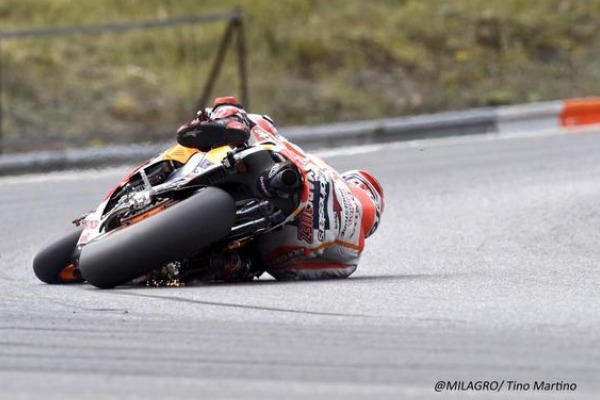 Marc Marquez’ testing day in Brno attracted quite a lot of attention. It wasn’t just because he was the fastest rider on the day, but it was more about a certain save he made.

The pictures went viral – and you can see them here – Some claiming he had actually crashed, and others scratching their heads at just how he managed to defy the laws of physics and keep the thing upright on two wheels. As for the man himself, how did he manage to keep it rubber side down?

“I was really, really lucky because I lost the front, but really smoothly,” Marquez told a packed press conference ahead of this weekend’s British Grand Prix.

“I was able to save with my elbow, but it was very long and I was able to think during the slide how I can manage. “Then when I was on the floor I say ‘ok, now full gas’. I opened full gas and when I opened my eyes again I was on my bike! Ok, thank you very much!”

Marquez will be hoping for a much easier ride this Sunday when he looks to extend his championship leads which currently sits at a commanding 77 points ahead of team-mate and victor last time out, Dani Pedrosa.