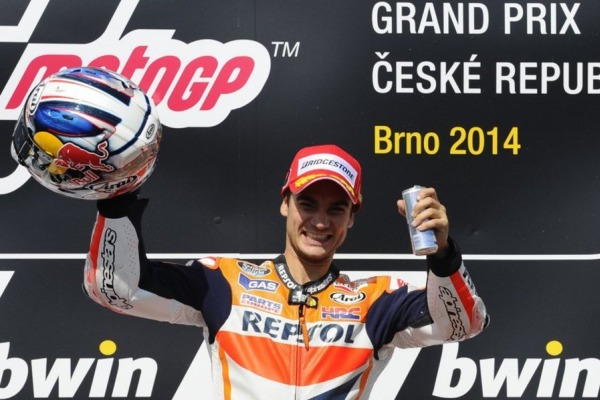 Dani Pedrosa won his first race of 2014, ending Marc Marquez streak of victories at 10, with the reigning World Champion failing to make the podium in Brno.

Despite starting from fifth on the grid, Pedrosa had one of his trademark fast starts to get him towards the sharp end of the grid, before a battle with Lorenzo, in which he eventually bettered his compatriot by just 0.410 seconds.

“It was very important to have the first victory of the year. The best moment was when I arrived in pace ferme and saw the faces of the mechanics. That happiness makes the race so special,” said Pedrosa whose victory was his 26th in MotoGP. “We are here to try to win races and obviously every weekend you put in the best effort you can. Marquez put in a super effort in these first 10 races and it was really difficult to do a thing better than him. Finally when you can achieve what you really work for the feeling is really special. “When Marc is winning many races and you are at home your family and friends say ‘okay the next race is for you, you must remember me when you win. So I had a long queue of celebrations for people and I couldn’t remember all of the things I promised to do!”

Despite not getting his first win of the season, Lorenzo claimed his third podium in a row, and will look to build next time out at Siverstone where he has won the last two seasons.

Valentino Rossi rounded out the podium, with his seventh podium of the season. He just didnt have the pace to battle properly with Pedrosa and Lorenzo, and saw the gap in the world championship to second place Pedrosa grow from four to 13 points. Despite that it was still an historic day for the Doctor who equalled Alex Barros’ record of 245 starts in the premier class of Grand Prix racing.

Even with Marquez’ win streak over, the World champion couldn’t even manage a podium in Brno. Despite that, he still finds himself with a three race win cushion, sitting 77 points ahead of his team mate with seven races remaining in 2014.

Andrea Iannone would finish top Ducati, just getting the better of his compatriot and team mate for next season Andrea Dovizioso for fifth and sixth position respectively.

Stefan Bradl finished in seventh position on his RC213V, ahead of Aleix Espargaro, Bradley Smith and Alvaro Bautista who rounded out the top ten.

Leon Camier, who will stand in for Nicky Hayden once more at his home Grand Prix in Silverstone in two weekends time, score dhis first MotoGP point, finishing in fifteenth.