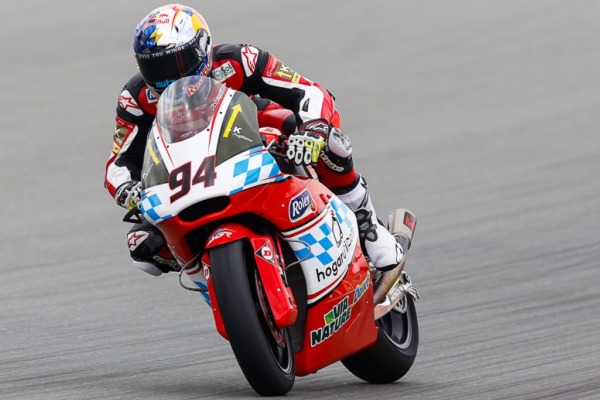 The transition from the Moto3 class to the Moto2 class is a notoriously hard step. However, the class of 2014 are taking to their new machines like ducks to water, and could one of them be set to move straight to MotoGP in 2015?

According to reports in Germany, Moto2 rookie Jonas Folger could be the man Herve Poncharal turns to if he decides to replace Brit Bradley Smith who has struggled to kick on in his second season on the Tech 3 Yamaha M1.

The 20 year old moved to the Spanish AGR Moto2 team at the start of 2014, Poncharal is eyeing up the young German as his possible replacement.

“Bradley met our expectations, but not quite in the second year,” team owner Herve Poncharal told speedweek.com. “That’s why we looking for other young drivers. We deal with every young talent in Moto2. Jonas is clearly part of our considerations. He’s quick in the rain and quick in the dry, he is one of the best rookies in Moto2. He is more than qualified to move up to the MotoGP class.

“But it may be that Bradley will stay with us in 2015 alongside Pol Espargaró. The contract situation is not entirely clear with Jonas. It looks as if he is bound for two years with the AGR Moto2 team.”

As well as the possible contract complications with the AGR team, personal sponsors may also become an issue. Folger has been personally sponsored by Red Bull since his time in the Red Bull Rookies series back in 2008, and he is currently still sponsored by the energy drink giants. The Tech 3 team is of course sponsored by Monster Energy. So if Folger cannot break off his contract with Red Bull for 2015, that’d be another obstacle in the German’s path to MotoGP.

The personal sponsor could go even as far as to decide who ends up partnering Pol Espargaro in the Tech 3 team, with championship leader Tito Rabat already sponsored by Monster, and with a clause in his contract saying he can leave the Marc VDS team is a prototype MotoGP offer comes his way.

Folger’s personal manager Christian Llavero refused to be drawn on speculation that Folger may be heading to the MotoGP class, by insisting that Jonas has had some interesting offers, namely from within the Moto2 class.

“We have some interesting offers, especially from the Moto2 class,” explained Llavero. “One option is of course to stay with AGR another year.”

It would be a brave move from the Tech 3 team to pursue Folger, especially as midway through the 2012 season it appeared Folger would be heading into Grand Prix abyss after leaving the poor Ioda Moto3 racing project. It was only when Jorge Martinez Aspar offered him a ride in Moto3 that Folger’s career got a second wind. He took third on his debut and enjoyed a successful 18 months on the Kalex KTM.

Should Folger eventually make the move up, it would be the first time in the modern MotoGP era that there would be two full time Germans in the MotoGP class.

One thought on “Jonas Folger to replace Bradley Smith?”