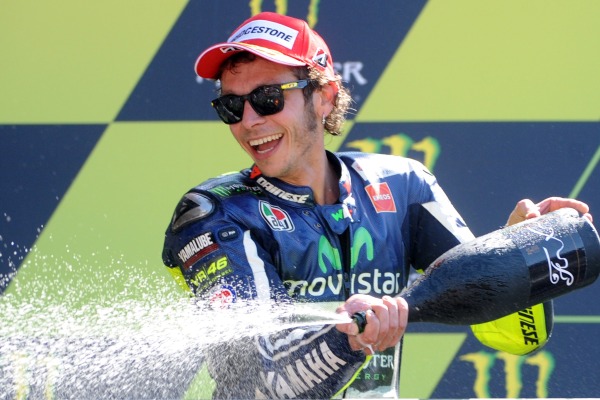 Valentino Rossi goes to Germany a happy man with a new two year contract with the Movistar Yamaha team in his pocket, allowing him to concentrate on stopping Marc Marquez.

The Doctor signed his new deal in Assen, although it wasn’t announced officially until after the race weekend, as the 36 year old struggled with tyre decisions in the unpredictable conditions in Holland.

“I am very happy to go to Sachsenring after the contract renewal with Yamaha for another two years,” said Rossi.

“I’ve been saying that we are very close to signing for many races and finally we did it! For me it is really important, I am very happy!”  “At Assen we did a good race but at the Sachsenring we’ll try to do better,” said the Doctor.

“I like the track; it’s very difficult, very tricky and very small. In the last few years it was not so bad, especially with the Yamaha. It’s strange and something different, but it’s always good to ride MotoGP there.

“In Germany we can also have issues with the weather. It is always difficult, so we hope for good weather so we can make a good result.”

Rossi finished third last season in Germany, behind Marc Marquez and Cal Crutchlow, and hasn’t won at the Sachsenring since 2009 when he defeated team-mate Jorge Lorenzo by just one hundredth of a second.

Whilst Rossi goes there a happy rider with his future sorted, Jorge Lorenzo goes to Germany with a lot more uncertainty over his future.

The Mallorcan is the only one of the ‘aliens’ yet to sign a contract extension with their current team, and with Pedrosa signing with Honda, Lorenzo’s only options out of Yamaha would be with Ducati or Suzuki. With the Suzuki looking still some way short of a bike capable of challenging, is Lorenzo considering the switch to Ducati?

Well on Tuesday afternoon Lorenzo did little stop rumours a switch to Ducati may be imminent by paying the Ferrari team a visit at their base in Maranello… not far from Ducati’s headquarters in Bologna. He visited Alonso in the simulator and saw Marc Gene after some laps in what was a surprise visit to the Ferrari team. Lorenzo has history with Ducati too. When Casey Stoner was out with his illness back in 2010, Lorenzo was very close to accepting a mega money move, before deciding he would be better served to stay with Yamaha.

However with Gigi Dall’Igna now at Ducati, the man who helped guide Lorenzo to his two 250cc titles aboard the Aprilia in 2006 and 2007, could Lorenzo be set to this time commit to the Ducati, in the belief that Dall’Igna will be able to turn the Ducati back into a race winning bike? We shall see.

Lorenzo hasnt spoken about his trip to Ferrari yet, although he will be probably asked about it in the pre-race press conference in Germany, the scene of his crash last year which saw him miss last seasons German Grand Prix, damaging the metal plate that was inserted on his collarbone after his Assen crash a week earlier.

After last week admitting his bad result in Assen was due to being scared in the conditions at Assen, the last thing Lorenzo will want to see in Germany this weekend is anymore rain.

“After a disappointing race at Assen where we expected much more I’m right now focused on the next race,” he said.

“Sachsenring is not one of my favourite circuits, especially after last year when I crashed again and I had a problem with the plate fixing my collarbone. After that crash I had to suffer another surgery and that issue changed it all. “Despite this season where I don’t feel so lucky for so many different things, I’m looking forward to racing there and trying to revert the situation. The bike is working well and I can feel the support of all the team. I’m pretty optimistic as usual and I will never give up!”