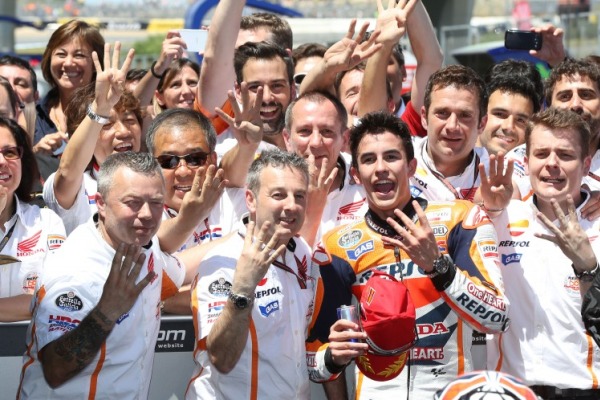 Marc Marquez claimed his fourth victory in as many races in front of a home crowd at Jerez as he finally won at the andalusian circuit.

It was the reigning World Champions 100th Grand Prix, and in winning it, Marquez becomes the first rider to win the opening four premier class races of the year since Mick Doohan in 1992.

Marquez was untouchable in the scorching heat of Southern Spain, where he once again dominated from the pole. After slowly edging away from the field, he built up a four second lead by lap 12, and was never caught.

“I am really happy,” said Marquez. “It is a different victory because I struggled a little more during the weekend as my level, the level of Dani, Valentino and Jorge was so close, but then in the race I don’t why I felt so good. “I started well today, but when I saw that Valentino was trying to pass me on the first corner I knew his intention was to slow down the race so he could control the pace. “Riding behind him I realised that I could go faster, so I tried to overtake him as soon as possible. I was surprised, because I wasn’t expecting to open up a gap.”

Rossi rolled back the years, and claimed a superb second place, as he returned to the podium for the first time since Qatar. His second place looked in jeopardy when Dani Pedrosa closed on the M1, much like seven days earlier in Argentina, however this time the M1 managed to stay in front, holding off Pedrosa on the final corner.

Jorge Lorenzo could only manage fourth place at his 200th GP, meaning the only celebrations for the Mallorcan were birthday ones.

Andrea Dovizioso won a superb battle behind the factory boys, and was fifth on his open Ducati, and was the only Ducati who made it to the finish line with Cal Crutchlow faced with brake probems.

Alvaro Bautista registered his first finish of the seaosn, and in doing so got his first points of 2014 in sixth, finishing just 0.112s behind Dovizioso.

Aleix Espargaro was seventh just pipping Bradley Smith on the line, with the four riders finishing within 0.5 seconds of fourth placed Dovizioso.

Pol Espargaro and Stefan Bradl rounded out the top ten in Jerez.