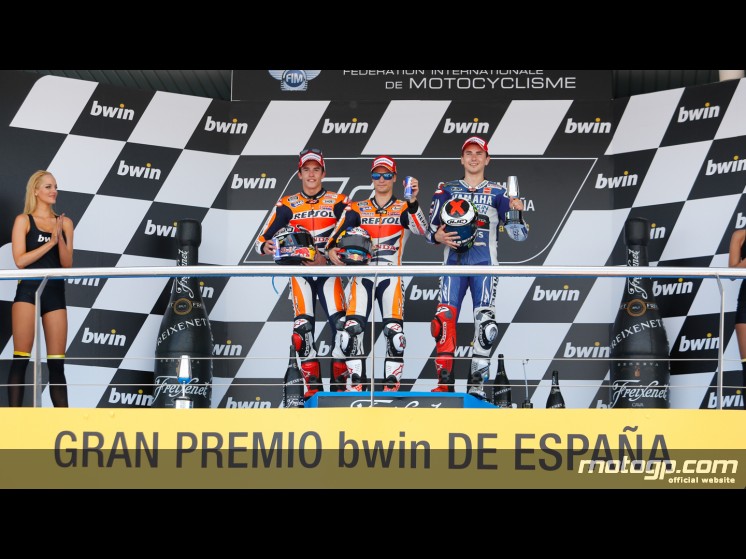 Dani Pedrosa claimed his first win of the 2013 today at home in Jerez, but the race will be remembered for a last ditch move by Marc Marquez on Jorge Lorenzo in the final corner to make it a second Repsol Hond 1-2 in as many weeks.

Despite Lorenzo having the pole, it was Dani Pedrosa who got the holeshot, but after a stunning overtake into turn 2 the reigning world champion was back in charge.

Lorenzo look set to run away with the race, much like he did at the season opener in Qatar, but by lap 6, Pedrosa had caught up with his compatriot and pressured the championship leader.

With pace to leave Lorenzo, Pedrosa set himself for a boring race, and managed the gap perfectly, and ended up taking the 46th win of his career and the 23rd in MotoGP.

However behind Pedrosa is where all the action ensued. Jorge Lorenzo remained calm and made his M1 remarkably wide under intense pressure from fellow championship leader, Marc Marquez, and managed to withstand several hairy moments at the dry sack corner at the end of the back straight.

After a few warning signs Marquez cooled down and backed off for a few laps, conceding around a second to Lorenzo, before closing back up on his compatriot.

Marquez had another look at the dry sack corner, before one more having the door slammed in his face, before regrouping, and mounting a last lap assault on Lorenzo.

The battle went down to the last lap, when on the last corner – somewhat ironically at Lorenzo’s corner – Marquez made a desperate lunge to get up the inside of Lorenzo, when the two clashed. Lorenzo was trying to make the turn, and Marquez had to sit up or he’d have run straight into the gravel. Almost a carbon copy of Rossi’s move on Sete Gibernau back on the same corner in 2005.

The end result was that Marc Marquez took second, and the outright championship lead, whilst Lorenzo was left very angry with the events which just unfolded, leaving him to snub Marquez’ apology in Parc Ferme.

After the race Marquez was appologitic over the incident. “I say sorry to Jorge because you never want that,” the 20 year old said.

“In the end the most important thing is that we both finished the race so I think it was a nice battle for the fans. On the last lap I did 110 per cent, and when I saw in the last corner that Jorge opened a little bit the door, then I go in.”

“I didn’t want to lean on him, I think it was a clean pass. I learned watching the videos of Rossi against Gibernau, and Pedrosa did the same thing once. I tried to talk to Jorge but he didn’t want to talk.

“I’m sorry, but I think he’s more angry with the lost position than with the maneuver. It’s normal that he’s angry and with time he’ll get over it. It was a clean maneuver and others have done it there, it’s a normal race contact. In races you have to give your best and that’s what I did.”

Lorenzo was initially fuming and refused to comment right after the event, however he later said: “After Marquez’ error at turn 6 I didn’t think he was so close or I would have taken another line, but it is also true if I didn’t lift my bike I wouldn’t have gotten 16 points.

“I’m not that happy, but I am 16 points from the top of the standings, which isn’t bad, but we certainly have to work. The truth is with the Yamaha you could do a fast lap, but not for the entire race.

“I’m happy with my race and at peace with myself. This gives me serenity, when I have a better bike I can win. Today’s race wasn’t positive or negative, there will be other races.”

Valentino Rossi had a lonely race coming in fourth position. Rossi initially had the pace of Lorenzo and Marquez but after a brief duel with Marquez in lap two, he would get dropped and stay there for the rest of the race.

A battered and bruised Cal Crutchlow took fifth position. After practice and qualifying crashes, Crutchlow was always expecting to struggle to stay with the front runners, and did well to fend off a highly competitive and aggressive Alvaro Bautista, who claimed sixth place.

Nicky Hayden ened to top Ducati in seventh position, and for the first time he beat his new team mate Andrea Dovizioso. Dovi ended in eighth position, but was preoccupied with Aleix Espargaro who continued to punch way above his weight with his Aspar ART and managed to end inside the top 10 once again with a ninth position.

Bradley Smith closed out the top ten after battling with Ducati’s wildcard ‘lab’ test rider Michele Pirro, at the later stages of the race to collect points for the second time in his short MotoGP carrer.

The race was also characterized by a number of crashes including Andrea Iannone, Randy de Puniet, Yonny Hernandez, Lukas Pesek and Stefan Bradl. It was the Germans second crash in three races as he will need to improve before expecting a stern word or two from the powers that be at HRC.