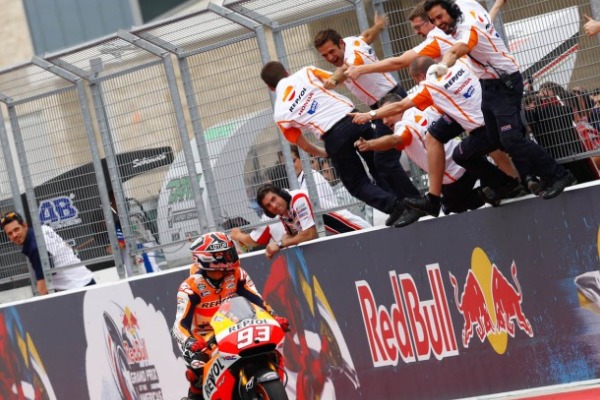 Marc Marquez’ perfect start to the 2014 season continued as he romped home in Austin, Texas at the Circuit of the America’s.

The defending champion has seemingly put his pre season leg break behind him as he has claimed maximum points so far, with a victory by a four second margin from his Repsol Honda teammate Dani Pedrosa, whilst Andrea Dovizioso completed the podium on his Ducati GP14.

The race was over before it even started for Jorge Lorenzo who fell victim of a  jump start, which ruined his race after a ride through penalty on a miserable day for Yamaha.

Bar the strange start from Lorenzo, Marquez clear at the front all race, despite the best efforts of team mate Pedrosa. However leading with ease, and knowing he had the added grip of the harder tyre for the latter stages of proceedings should it be required.  It wasn’t needed though, and Marquez became the first rider to win the first two races of the year from pole in the premier-class since Mick Doohan in 1995.

Dovizioso rode a perfect race to claim third place, and the first podium under the Gigi Dall’Igna stewardship, edging out Stefan Bradl and Bradley Smith. It was however not all good news for Ducati, as Cal Crutchlow crashed and broken his right hand.

Pol Espargaro was sixth, as the battling duo of Bradl and Smith edged away from the rookie who rode to a solid position as he is still building up strength from his collar bone.

Andrea Iannone ended the race in seventh, but that doesn’t tell the full story of how well the Italian Pramac rider did. Iannone was comfortably third, till his tyre slowly fell away with just under 10 laps to go, and he eventually ended eighth.

Valentino Rossi had front tyre issues, and it ended up forcing the Italian backward after another miserable showing in Texas.

Aleix Espargaro was ninth at a track which he has admitted to struggling at, but he manage to hold off a late charge from Jorge Lorenzo who rounded out the the top 10.

There is now a weekend off before the paddock makes their debut in Argentina at the end of April.