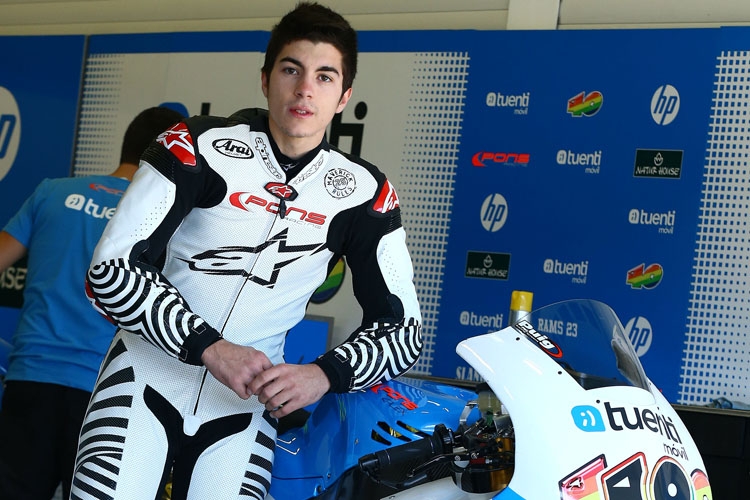 Moto3 World Champion Maverick Viñales began his assault on the Moto2 class last week, and started it in the perfect way, topping the timing sheets aboard his new Pons Moto2 machine.

The 18-year-old, who won the Moto3 title in dramatic scenes back in Valencia last month, had no time to dwell on his success, as he was busy testing his new Pons Tuenti Moto2 Kalex. And he took to it like a duck to water.

Back when he stormed into the Grand Prix paddock as a 16-year-old in 2011, 1993 500cc World Champion and MotoGP legend Kevin Schwantz sung the praises of the young ‘Mack’ and put him in the same breath as Marc Marquez and Marco Simoncelli. It now appears the Viñales is ready to show the class that was undoubtedly there when he burst onto the scene three years ago.

In an interview with German website speedweek.com, after his first Moto2 test, Viñales spoke about the step up to Moto2, and what his hopes are for the 2014 season.

“The difference between Moto2 and Moto3 is not so huge,” said Viñales. “Sure, in the power, acceleration and weight there are differences. But I think that Moto3 is a good school for Moto2.

“The engine power is not a problem at all, the bigger problem is trying to find the correct line. If you’re not on the right line on corner exit, you can not speed up soon enough.”

When asked about the degree of tyre wear, Viñales said: “Yes, that is a big difference to Moto3. There (in Moto3) you have the same grip from the first to the last lap… But in the Moto2, you lose too much rear grip.”

Viñales was then asked about the pressure he is under, and the expectation he has had to deal with. He went on to show just how much he has grown up since the Malaysian incident in 2012.

“Sure, a lot is expected from me. But I have to stay calm, really! I need to learn step by step, and I’ll gradually improve. Falls would just knock me back.”

When asked on his aim for 2014, he remained coy, without wanting to give too much away.

“I don’t know, I don’t know… Moto2 is a very difficult category. The level is very high. We will do our best…”