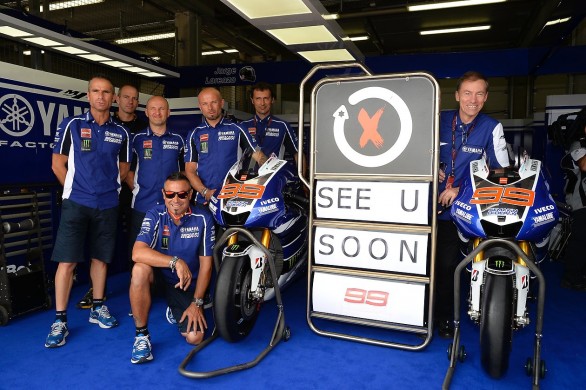 Jorge Lorenzo may continue his superman efforts and compete in the Laguna Seca Grand Prix this weekend, despite ruling himself out at the weekend.

The world champion tweeted Saturday evening, saying “To the people asking me about Laguna, I would like to say that I don’t want to take more risk and have a good recovery. See you in Indy!” However something may have changed the mind of Lorenzo.

To the people asking me about Laguna, I would like to say that I don't want to take more risk and have a good recovery. See you in Indy!

In amongst Pedrosa’s crash and subsequent absence in the German Grand Prix, and seeing rookie Marc Marquez take the championship lead, Lorenzo may fancy his chances of closing the 11 point gap to the top of the standings.

Lorenzo’s crew are heading to Laguna, along with his two M1’s, preparing for a change of heart, and only increasing the rumours that he may yet make an appearance in California.

If Pedrosa get’s clearance from the doctors in Spain today ahead of flying to Montery, there may be another last minute dash from Barcelona to California.

Lorenzo’s rivals are none the wiser as to what the superhuman Lorenzo may do next. Team mate Valentino Rossi believes that Lorenzo will be at Laguna Seca, saying: “This is just my idea, but Jorge will race in Laguna. I don’t know anything and it is just my feeling. The surgery was ok and he has one week. In the beginning for Jorge it was scary and frustrating but I know what happens in your mind. After some days you start to feel not so bad and you say ‘why not?’ But maybe I am wrong!”

Marc Marquez is unsure, but doesn’t think the championship standings will be a huge factor in Lorenzo’s decision, “Like we said in Assen, what he did there we were surprised about, so we can expect anything,” If he is ready [for Laguna Seca], why not? But the situation of the championship won’t change his mind, is my opinion.”

Cal Crutchlow, who was one of the first riders to mention Lorenzo’s Assen escapades, doesn’t think it is worth the risk, and thinks his good friend should focus on Indy. “I think he will be a bit wiser this time to come back.It is a racer’s instinct to come back straight away and he did a fantastic job at Assen. What he did was really remarkable. But I think now after a second operation he will not take the risk again, because he is already thinking for the career. If you want a longer career it is better not to get hurt … He may as well wait. It makes no difference I think.”

Today (Wednesday) Lorenzo has confirmed he will be travelling to America with the intensions of racing this weekend. Lorenzo received good news in his medical, and today tweeted a picture of him packing his suitcase with a message saying “Almost ready for Laguna Seca.” Whether Lorenzo remains fit enough to race remains to be seen, but he will certainly try.