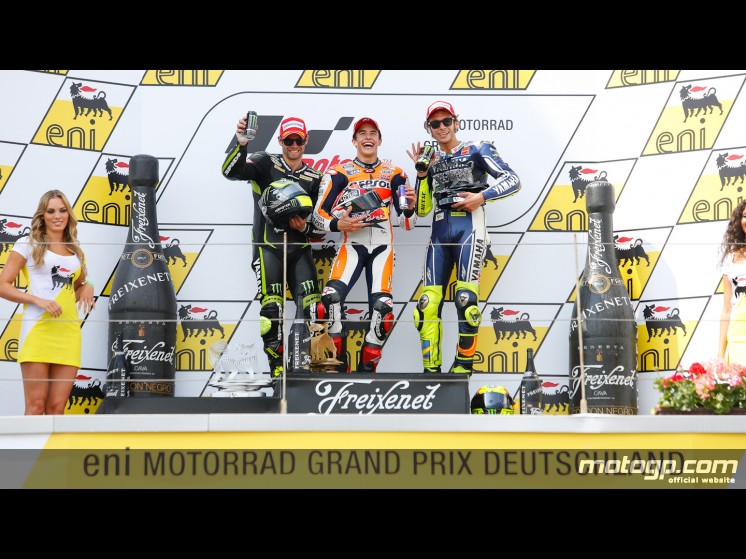 Marc Marquez dominated the German MotoGP at the Sachsenring, and put himself at the top of the MotoGP standings as the summer break dawns.

With Jorge Lorenzo and Dani Pedrosa both absent it was a golden opportunity for Marquez who took full advatnage for the opportunity presented. The rookie who continues to break records recoreded his second win of the season ahead of the battered and bruised Cal Crutchlow and a resurgent Valentino Rossi.

Starting from pole Marquez didn’t get off the line all that well, and it was third place man Rossi who got the holeshot, with local hero Stefan Bradl and Aleix Espargaro following.

However Marquez soon started to move, passing Espargaro before setting his sights on the winner of the Dutch TT, and the local hero.

Despite the great start Espagaro ended the first lap in sixth as satellite duo Cal Crutchlow and Alvaro Bautista passed the CRT man.

It wasn’t until Lap 5 that Marquez managed to pass Rossi with bold move, before homing in on his 2011 Moto2 rival.

One lap later now chasing Marquez Rossi had a big moment in the middle of the string of right handers that lost all momentum for the Doctor allowing Crutchlow to close right up. It was also just after this moment that Marquez got himself to the head of the field, and would ride off into the distance.

Rossi then got his head down, and began chasing after the two Honda riders, dragging along Crutchlow.

It was lap nine with Bradl was passed by Rossi, and he didn’t stay in third much longer as Crutchlow made light work of the German who saw his chances of a first, and home MotoGP podium slipping through his fingers as the Yamaha riders attempted to catch Marquez.

At half race distance Crutchlow managed to overtake Rossi, and immediately begin to distance the factory rider, who was suffering with tyre wear,  just as he predicted ahead of the race.

With gaps remaining constant, Crutchlow was saving hismelf for a big final push in an effort to catch the now comfortable race leader, and for a few laps it seemed as if the Brit might be making headway, only for Maruqez’ pit board to let him know, and the rookie responded with some quick laps to ensure he kept a comfortable cushion.

Bradl couldn’t stay with the Yam’s and faded to fourth, and he was followed by the second satellite Honda of Alvaro Bautista, who finished ahead of a lonely, but impressive Bradley Smith in sixth.

Andrea Dovizioso was seventh after an almighty battle with Aleix Espargaro, who himself claimed eighth position ahead of both Nicky Hayden (9th) and Michele Pirro(10th).