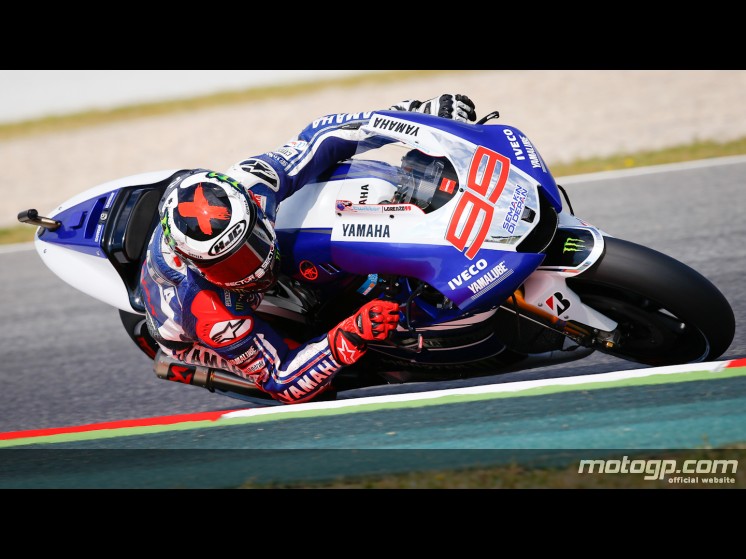 It’s not every day you get the opportunity to speak to the best in the world, however this week GPxtra have done exactly that.

In a exclusive interview we managed to speak to Factory Yamaha rider, and double MotoGP world champion Jorge Lorenzo.

Jorge spoke to us after his heroic and incredible efforts in Assen in what can easily be described as GPxtra’s biggest interview to date. In the interview we asked Jorge about how his season is going, how his M1 is handling, and how he would like to be remembered as a rider.

GPxtra – We’ve really seen ‘the hammer’ in recent weeks, and it’s got you back within touching distance of Pedrosa, how big a psychological boost is that?

Jorge Lorenzo – It was really important for me after the first races where Dani got a very strong pace. Then I found at Mugello some things on my style and helped me to recover some points. But the most important thing, to feel better the bike. That’s why I could achieved two important victories in Mugello and Barcelona.

– Some say that this season is some of the best riding they have ever seen from you, would you go along with that?

Yes. I feel pretty confident, mature, quite calm regarding my personal life and also on the bike. I don’t mind so much who the bike is working because always try to get the best of it and I think a good rider needs to know his bike and find out what is the best way to win with that bike. Now I considere myself a well-experienced rider, also world champion and I know how to take profit of what I have in the box with my team.

– Did you feel any different pressure coming into this season as a defending MotoGP world champion for a second time? Or is it the same as it was in 2011?

Definitely, I have no pressure. When you are able to win two world titles in MotoGP you feel you can retire in a different way. I am really quite with myself. After winning the first one maybe I relaxed a little and when I realised I needed to work harder it was a little bit late. Now I am older and I learnt from the first title. It’s a different situation and I’m happy with my job, I don’t need to think so much about the future. Just try to make my plan step by step.

– Is the 2013 M1 much different to your title winning bike last season?

In fact is really similar. No so many diferences, just little settings but I have the same feelings than last year. Even better.

– The M1 looks like it is still slightly struggling with acceleration, would that be the case?

More than acceleration is in terms of traction where we lose a bit. In the circuits with you need acceleration, obviously we suffer more than the Honda bikes but in other kind of layouts we go better. We have a very complete bike.

– Have the recent tests helped develop the bike coming into the busiest part of the season?

After the test in Aragon both Valentino and I were able to find some little adjustments make the bike easier, especially in tracks like Motorland where usually we struggle more, but we will see if is enough to fight for the championship till the end.

– We go to the Sachsenring from Assen, two very different tracks in terms of layout, does the set up of the bike change much between the two?

Yes, absolutely. Is completely different. One circuit is plenty of speed corners, ver flowing. The other one is like a small track, a karting track, with slow corners, most of them into the left, up and down. Two bikes different for two different circuits.

– How much does it help you having Ramon Forcada besides you? And does your close knit team help you when you get to a track on a weekend

For sure Ramón helps me a lot. He has a lot of experience and besides him I feel calm down, specially when I come back to the box to detail the behaviour of the bike. And also a great team all around. All of my mecanics are the best in the paddock. I can’t complain about this, for sure. During a weekend emerge some tension but we knit a great group of professionals.

– This year you appear to be willing and able to come out and set the quick laps right out of the blocks, is there a particular theory behind this?

No. I feel confident with the bike. Of course, this kind of tyres we use now are completely diferent to the others we used in the past. The construction is softer to get the performance quicker than before. This tyres allow you to push easier from the beginning.

– How are you finding the new qualifying format? Valentino has gone on record saying he’s struggling, but with front row starts in every round this year, you look like your adjusting just fine?

I don’t have any problem with this system. Is true Valentino is finding some problems to solve his quick laps but he needs time to iunderstand, maybe is coinfidence, I don’t know. From my side, the only thing is you never can make a mistake because in that case everything is gone in 15 minutes

– Does your mindset change when you enter a race weekend trailing in the championship, as opposed to leading it, or it is the same mindset for every occasion?

Is the same. I always try to think in the same way, race by race, but obviously when you are leading you can managed better you budget of points when you race. Anyway I think you can not race with the calculator in the back.

– How much more encouragement does it give you when you see the black grandstand full of Spartans?

Is very emotional to see you fans on the grandstands but unfortunately, until the finish of the race you are not be able to realize how much people is supporting you in the surrondings of the track. Then, if you can achieve the victory to celebrate with them all is fantastic, amazing.

– Does a win at home mean more than other wins? Or do you take them all as the same?

Always bigger satisfaction. In terms of points is the same, but personally to win in front your home supporters is terrific. I don’t know how to explain the emotion is but is completely different I can tell you.

– You appear to be good friends with Max Biaggi, do you speak to Max much away from the track?

Sometimes. We support each other! In my entire life I always supported Max by his riding style and after his retirement as a person. We speak sometimes and he use to come some races like Mugello.

– You are now ahead of some Grand Prix legends such as Schwantz, Rainey and Criville in terms of the history books, how would you like to be remembered when you eventually retire?

As a rider who achieved a dream and fought really hard to got it. But even more as a person who learnt to become a better person.