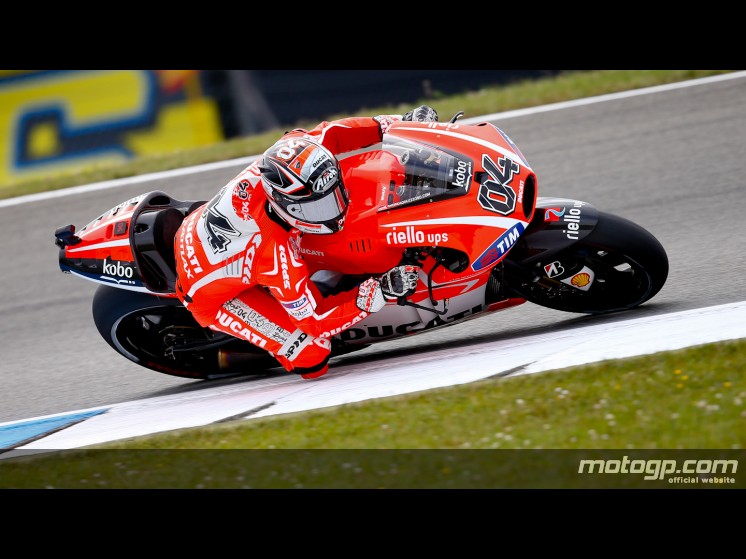 Andrea Dovizioso and Nicky Hayden will be on different Ducati’s this weekend as Dovi will race the new Ducati ‘evo’ bike for the first time.

The evo bike that Dovizioso will be using is based on Pirro’s laboratory bike, but the only difference is a new frame that arrived just hours before the private test, that allowed Dovizi more corner entry feedback.

“We did a good job last week in a private test at Misano, so for the first time, Andrea will bring the ‘new’ bike for a race weekend,” confirmed Vittoriano Guareschi.

“It will be very interesting to see how it works at the Sachsenring after the positive impressions he had at Misano.

As for Nicky, he did some good lap times at the test, and he’ll continue with the current bike.”

Dovi doesn’t know how his new bike will go at the weekend, but knows that it’s all about experimenting at this stage of his Ducati career.

“I don’t know how the Sachsenring will be for us; as is the case at many tracks this year, this one will be new for me with the Ducati,” said Dovizioso.

“It’s a small circuit, but it’s very complicated. I’m not crazy about it, but I’m curious to see how the Desmosedici will go there. We knew Assen wasn’t one of the easiest tracks for us, but we certainly didn’t ever expect all the problems we had. Still, we go to the Sachsenring as we always do: determined to get the best result possible.”