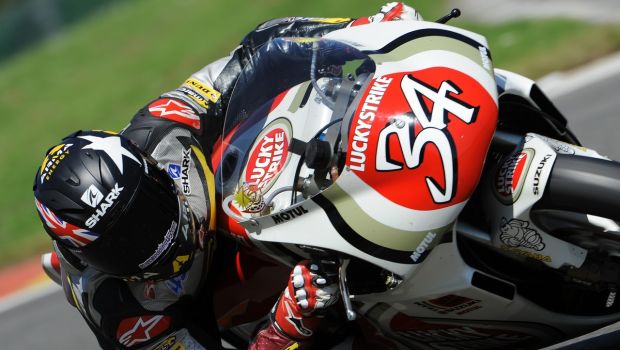 Moto2 championship leader Scott Redding was racing this past weekend, but not in his conventional way, the Brit was at the annual bikers’ classic at Spa.

Redding, who has been in action at Spa driving BMW M3 GT4 car and taking part in charity Supermoto race, was in action on one of Kevin Schwantz’ 1994 Suzuki RGV 500 XR84’s.

The Marc VDS rider lined up on the bike, which is owned by businessman Steve Wheatman, on a grid including some of the biggest names in the history of motorcycle racing including Giacomo Agostini, Phil Read, Wayne Gardner and Christian Sarron.

“Lining up on the grid with all these champions around me, it felt like I was actually taking part in a 500GP race,” said Redding.

“Sat there on the bike in front of a huge crowd, surrounded by the likes of Wayne Gardner, Christian Sarron and Didier De Radigues, I got a real good feeling for what it must have been like for Kevin Schwantz when he lined up to race this bike back in ’94. It was an incredible experience.”

Redding was actually making part in the 10 lap parade, but eventually the champions instinctive competitive took over, and it turned into a brief race. Redding forced his was past such names as Sarron, Gardner and Didier De Radigues, eventually finish a close second behind Steve Plater, who was riding the Suzuki RGV500 XR88.

“I got a good start to lead through Eau Rouge, but this was my first time on the track on two wheels, on a bike I only slung a leg over ten minutes beforehand,” continued Redding.

“The rest of the guys rode yesterday, so they had a bit of an advantage in the opening laps, but it didn’t take me long to get a feel for the bike and to figure out the lines. I managed to push my way back up into second and then had a great battle with Steve Plater over the last few laps.

“I was knee down and I could see I was quite close with the elbow, so I just leant it over a bit more and down it went. I don’t think they did that in 500GP back in 1994, but then the tyres we were using today offer a lot more grip than those Kevin Schwantz had to contend with when he raced the bike.

“The bike was absolutely amazing. Okay, the brakes weren’t great, but we were expecting that. The handling was incredible because the bike is so light; it was really easy to change direction. It accelerated hard too, with the front coming up in every gear. I didn’t need a rev counter; I just changed up whenever I felt the front wheel was high enough! There was a lot of power, but it was pretty controllable, nothing like the razor sharp powerband I was expecting. It turns like a 125 and was still pulling in sixth. They should bring these back. It was absolutely mega to ride!”