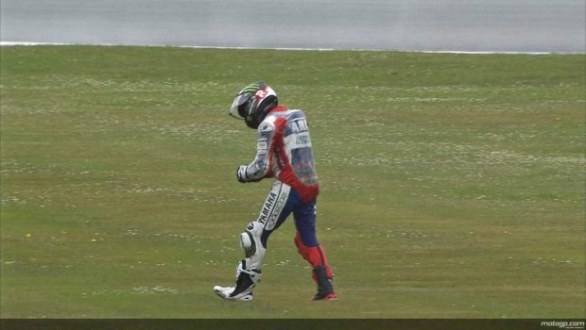 The World Champion was expected to stay in Assen hospital overnight, however Yamaha chartered a jet to take Lorenzo back to Barcelona where he was operated on at 2am.

Dr Mir who first diagnosed the injury said that Lorenzo wouldn’t have surgery till Saturday or Sunday, however with the surgery now done, rumours are flying around the paddock and twitter that we could yet see Lorenzo in this weekends TT.

Lorenzo was operated on by Dr. Joaquin Rodriguez of the Hospital General de Catalunya, assisted by Dr. Ana Carreras, Dr. Marcos Cots and Dr. Michele Zasa of the Clinica Mobile.

“The duration of the surgery was approximately two hours; the clinical course of post-operative has been regular,” said operating Dr Zasa.

“Jorge sustained a displaced, complex fracture to the third medial of the left collarbone. It’s been a challenging operation, apparently successful. We inserted a titanium plate and eight screws to secure the fragments of the collarbone.

“Jorge has just woken up from the anesthesia. In the next few hours we will evaluate the progress of the patient and then we will be able to estimate how long the post-surgery rehabilitation will take.”

Lorenzo’s team Manager Wilco Zeelenberg also said: “Following the medical check at the Circuit’s Medical Centre first and at the Assen Hospital later, yesterday Jorge decided to be operated as soon as possible.

“Unfortunately no operation room was available in Assen due to some other very urgent life threatening operations that had much higher priority than Jorge’s collarbone and therefore we flew to Barcelona, where a surgery room was made available at the Hospital General de Catalunya.

“The surgery, that started at 2.00am and finished at 4.00am has had good results and now Jorge is sleeping, exhausted from such a long and tough day. We have to wait till he wakes up before making any further evaluation of Jorge’s physical conditions and how long his recovery will take.”

If Lorenzo does indeed line up on the grid come Saturday afternoon, he looks like he will start in 12th position, with his FP1 time, combined with wet sessions being enough to put him through to QP2.